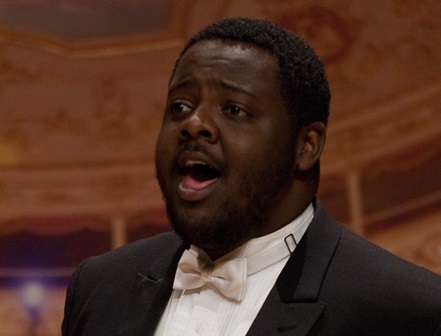 The hills are definitely alive with the sound of Chapman University vocalists. For the third consecutive year, an Opera Chapman member has won the prestigious Schloss Mirabell Vocal Competition in Salzburg, Austria, the historic city and setting for the legendary film
The Sound of Music.

Tenor Marcus Paige ’15 is the most recent winner of the competition. Paige will receive the award on Aug. 4 in the renowned Marble Hall during the Mirabell Palace Concert Series.

“Marcus represented Chapman and the
Hall-Musco Conservatory
of Music with the highest degree of professionalism and artistry. I know everyone back home will be proud of his accomplishment,” said Peter Atherton, DMA, associate professor, and Paige’s voice instructor.

Paige is the fourth Chapman graduate to earn the prestigious award. Other students who’ve won the Schloss Mirabell Vocal Competition — all students of Atherton — are Kevin Gino in 2013 and Kylena Parks and Andrei Bratkovski in 2014.

Paige earned his bachelor of music in vocal performance from the Hall-Musco Conservatory. He performed numerous roles with Opera Chapman, including: Nemorino in
L’elisir d’amore
, Don Basilio in Mozart’s
Le Nozze di Figaro
, as General Kromow in
Die Lustige Witwe
, Edgardo di Ravenswood in
Lucia di Lammermoor
and the title role in
Candide
.

He was also a featured soloist in the Pacific Symphony’s Tribute to Leonard Bernstein and was a featured chorus member in multiple Long Beach Opera productions including:
The Difficulty of Crossing a Field
by David Lang and
Camelia La Tejana: Only the Truth
by Gabriela Ortiz.