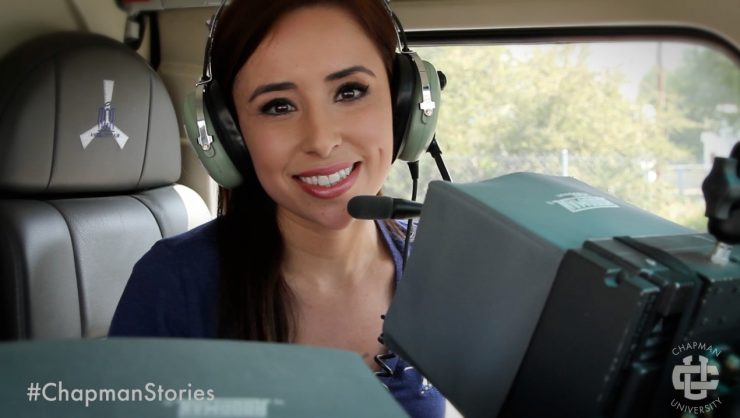 Eliana Moreno ’10 didn’t envision herself hovering over millions of Southern Californians, but at age 11 she already knew she wanted to be a TV news reporter. The bird’s-eye view is just a perk of the job.

Since graduating from Chapman University with dual degrees in broadcast journalism and political science, Moreno has been soaring over SoCal in her reporting role for KCAL 9 and KCBS 2. From brush fires to police pursuits to just about anything else that moves, if it can be shot from above, Moreno is probably tracking and describing it.

“I’m not just a photographer or reporter or editor, I’m actually doing all three things at the same time,” she says. “Every day is different; it’s such an exciting life.”

Moreno is comfortable juggling so many on-air duties thanks to her broadcast news training at Dodge College of Film and Media Arts, she says.

Her Twitter followers benefit from her aerial view. Like the time she spotted a baby great white shark off Surfside. Then there’s this tweet: “Just heard this on the (police) scanner. Officer to dispatcher: It’s a false alarm. The snake turned out to be an extension cord.”

Everything in her professional reporting life as the youngest aerial journalist in the nation’s No. 2 media market relates back to her Chapman experience, “from my freshman year to my senior year,” she relates. “My professors had a hand in preparing me for all that I do.”

And there’s no other job she’d rather have.

“I could definitely see myself doing this for the rest of my life,” she says.