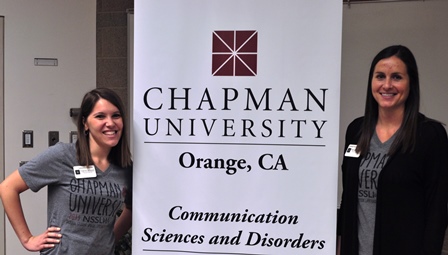 Survivors of traumatic brain injury help students understand the personal side of regaining health and independence.

Call it crowd-sourced therapy from the heart.

As Shelby Ganitch told the story of her continuing recovery from the traumatic brain injury she suffered in a snowboarding accident 19 years ago, her eyes teared up and her voice wavered. She made it clear that her challenges are still numerous and far from over.

But because Ganitch was speaking to an audience of speech language pathologists, clinicians and graduate students at a symposium sponsored by Chapman University’s
Communication Sciences and Disorders program
, she got a dose of instant reassurance.

“Your speaking is beautiful,” one called out.

Ganitch sat tall in her seat. “Thank you!” she said.

It was just the sort of experience graduate student organizers hoped for when they planned the fifth annual Survivor Symposium as part of their capstone project. The symposium programs were mostly about brain injury. But the panel discussion was intended to remind attendees that the heart is always a factor for such long, hard recoveries, said graduate student Sandra Barbu (M.S. ’15).

“We wanted to combine the two areas because often times there’s such a big disconnect between specialists, speech language pathologists, psychologists, neurologists and the families. We were trying to get both sides together in the same room and so they could see both aspects of the same story,” Barbu said, who along with classmate Christina Richter (M.S. ’15) organized the event.

So in addition to speakers like Chapman researcher Mary Kennedy, Ph.D., professor, who presented new research about brain injury and clinical strategies for working with survivors, Barbu and Richter assembled a panel of survivors and family members who shared their personal stories.

The panel included Ganitch, who wasn’t wearing a helmet when she hit hard ice while snowboarding and is still trying to regain her writing skills. She frequently speaks to teen groups about helmet safety, but told the audience how hard it still is for her to write, text or jot down a phone message at the restaurant where she works as a hostess.

“Not a day goes by that I don’t think about that day and everything that I have to go through and how difficult things are and the daily struggles,” she said.

Also on the panel were Stephanie Ragone, whose son suffered a massive brain hemorrhage in a skateboarding accident, and now navigates the health care system and the reluctance of some physicians to refer her son for more therapy.

Panelist Art Luke elicited shudders with his recollection of the “crumpling paper sound” he heard when a drunk driver slammed into him at 50 miles an hour. In retrospect, he realizes it was his skull colliding with the driver’s windshield. But he also earned smiles when he talked about swing dance lessons with his wife.

Learn more about all the graduate programs in the College of Educational Studies at the Education Graduate Programs website.


“Trying to get your head and your feet to work together with a brain injury is not an easy task,” he said, chuckling.

Following the panel, closing speaker Sue Rueb, owner and director of the Brain Rehabilitation and Injury Network (B.R.A.I.N), told the audience to remember that they all had the potential “to do something incredible” in the work they had chosen.

Everyone needs to be reminded of such messages, Richter said.

“We’re not just working on their memory and attention and speech,” she said. “They have these underlying feelings and emotions we need to know about.”