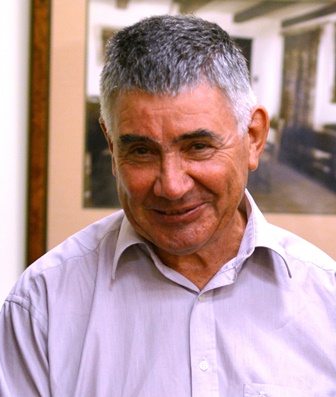 Meet Paul Arthur, distinguished visiting professor in Chapman University’s Peace Studies Program, where he continues the work of the late Professor Donald Will while serving as interim director of that program.

In 1998 the historic Good Friday Agreement helped end the Irish-Anglo disputes, one of the most intractable conflicts of the 20th century. Scholar and activist Paul Arthur was there as one of the young architects of that peace process. Now Arthur is a distinguished visiting professor in Chapman University’s Peace Studies Program, where he continues the work of the late Professor Donald Will while serving as interim director of that program for the 2014-2015 school year.

As airstrikes, suicide bombings, protests, insurgencies, drug cartels and all manner of violence rattle the globe, peaceful solutions seem awfully far away these days. But Arthur is still a champion of peace and reconciliation and says every conflict has lessons for today.

In a break between classes — and navigating Orange County freeways — the professor emeritus from the University of Ulster in Northern Ireland sat down with us to talk about peace, conflict and that hunk of the Berlin Wall displayed in Liberty Plaza just steps from his Roosevelt Hall office.

Q. You can see Chapman’s piece of the Berlin Wall from your office window. Does that have any special importance or irony for you?

A. When you look at it in the context of all that’s going on around at Chapman, what an ugly structure. And that enhances the power of it because it is a symbol of ugliness. It’s also a huge symbol of hope because that was the serendipity that opened us to solving our (Irish) problem. The collapse of the Berlin Wall led to changes in South Africa, the Middle East, etc., and it led the IRA to having to reconsider its long-term strategy. So it’s very, very important. And its ugliness enhances its potency.

Q. What would you say to the freshman with an undeclared major about the peace studies option?

A. The number one thing is to enjoy what you’re doing. Enjoy it as an academic and artistic pursuit and don’t let it be a burden and when you go in that direction you’ll be amazed at the things that open up for you. People who decide to specialize in this area tend to be people who are highly idealistic. They want to make a contribution to the world. It’s not about joining a large corporation, it’s about getting in an NGO or the State Department to make a difference. It can lead to a very fulfilling career.

Q. Contemporary conflicts like ISIS and Syria seem too complicated to ever resolve. How do you even begin?

A. In the life cycle of a conflict, you go through three different phases. The first is the analysis, the second is the negotiation and the third is the implementation. The negotiation leads to a peace agreement, but often that’s the easiest part. You don’t get to the peace agreement until you’ve done a thorough analysis of what the problem is. So let’s look at the problem from every angle imaginable, then we can talk about solutions. You have to work on the assumption that there is a solution, because if not, you’re into fatalism and passivity and that’s not what the human condition’s about.

Q. Do you see parallels between the extremists in the Irish conflict and those in ISIS?

A. Yeah. To give a specific example, we had hunger strikers. The difference of course is that with our hunger strikers, we weren’t taking anybody else’s lives. It was just those that did it. But what it says to me is that is an image of people saying, ‘We are absolutely impotent. What can we do? Therefore we go to this extreme.’ So trying to learn the psychology of this sort of thing becomes part of trying find a solution. It’s painstaking. It will take a long, long time.

Q. How might that look in a real-world scenario?

A. The first mistake we make when we speak of ISIS is we speak of a monolith. Every organization is a coalition of some sort. I have met some people from Hamas in the past. They met us quite openly. I was involved in a workshop in Gaza just before the outbreak of the second intifada. We were invited by President Arafat, who, I believe, and this is my assumption, was beginning to think of his legacy. We were people who’d come from different conflicts around the world and there were 300 key opinion makers gathered there. You could see there were so many gradations of opinion inside that. It’s trying to decide ‘To whom can I talk? To whom can I establish a link?’”

Q. You’ve written that “navel gazing” is a problem when it comes to resolving conflicts. Can you explain that?

A. One of the things I have discovered in visiting different countries is that one of the driving forces in conflict is this assumption that your conflict is sui generis, that you have nothing to learn from anyone else. I’m on the board of a couple international organizations, and one of the things that we do is get invited into a particular conflict and we bring people there from other conflicts to come and tell their stories. And the first thing that hits the auditors there is that there are commonalities between conflicts. So you have to create conditions where people stop contemplating their own navels. That’s become a cottage industry. Stop doing that. Try to look at the broader picture.