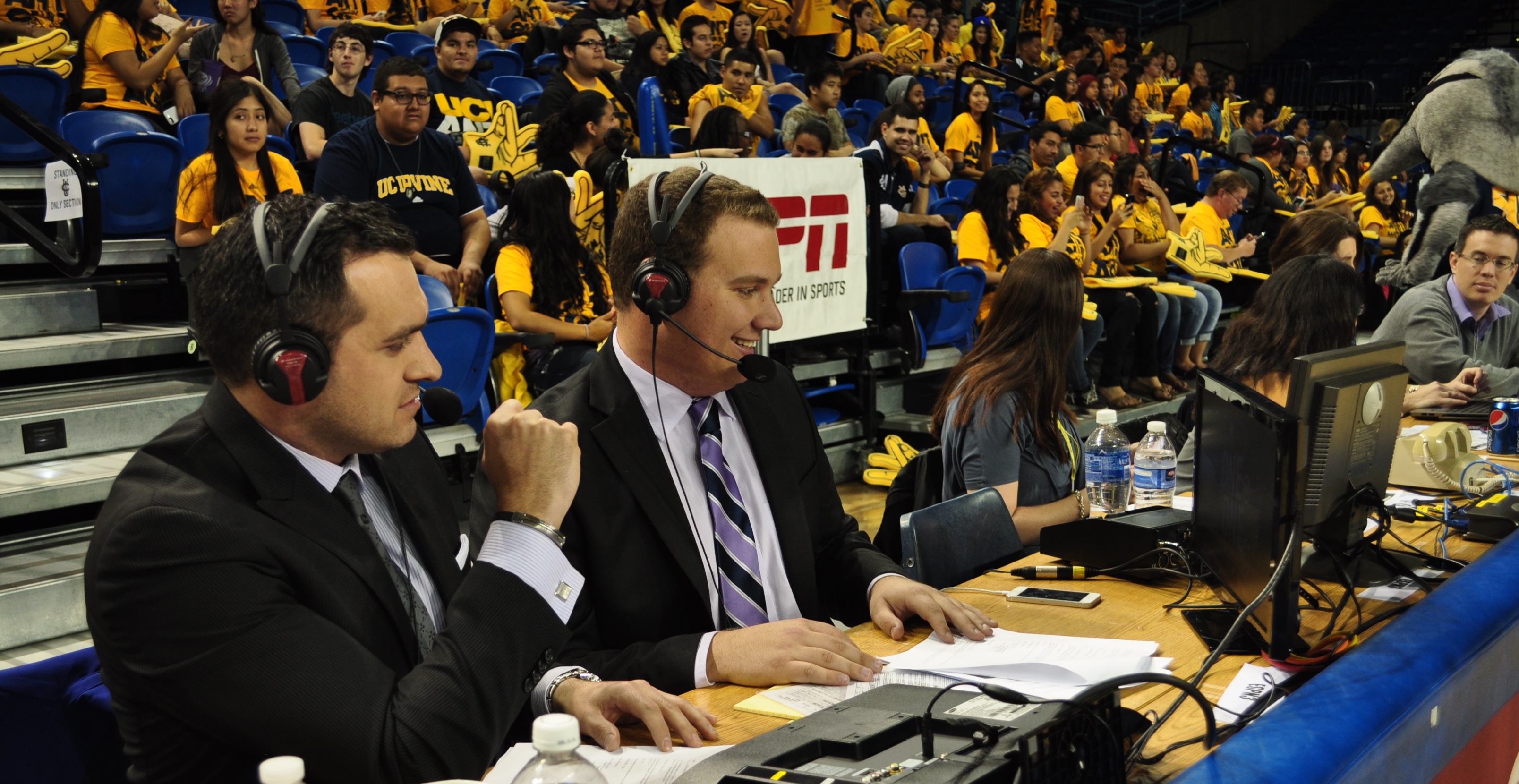 Once a benchwarmer, student finds his game announcing for ESPN3

You might guess that to land a play-by-play job with ESPN3 while still a senior in college, one might have had an early start in the business. That would certainly be the case for Trent Schlom ’14. High school announcing, local cable, Chapman Radio, Fox Sports prep reporting. Schlom’s done it all.

There’s one more gig to mention, although it might not make the official résumé.

“I wanted to be the weather man. I wanted to be
Dallas Raines
,” he says, referencing the energetic meteorologist for ABC7 in Los Angeles. He pauses to laugh and holds up an imaginary toy microphone. “I’d go everywhere with a microphone and a karaoke machine and it drove everybody nuts. I’d be going around asking ‘interesting’ questions about who knows what. I was 6.”

Maybe it’s just a fun story, but Schlom definitely possesses a natural-born dynamism in front of a camera. The television and broadcast journalism major is now a Big West Conference play-by-play announcer for
ESPN3
, covering basketball, volleyball, baseball and softball.

“When you get a student like that it’s almost like they’re your assistant teacher. He’s a good guy and he’s super talented,” says Pete Weitzner, associate professor, and director of the broadcast journalism program at
Dodge College of Film and Media Arts
.

Schlom has also helped other Chapman students secure internships as crew members on an ESPN3 broadcast truck provided by the sports network for the Big West conference, a venture forged by Weitzner and Schlom. Numerous Chapman students are involved with camerawork and other technical and production roles and earn “ESPN credits on their résumé,” Weitzner says.

Schlom’s foray into sports, however, was on the field. But it wasn’t in the cards. By his sophomore year at Orange Lutheran High School in Orange, Calif., he laments that it became abundantly clear that “I was the worst linebacker of all time.” Basketball was out when the early bloomer stopped growing.

But sports still beckoned so“I sort of knew that going to the broadcast booth was something I wanted to do.”

It was a good choice. He caught the attention of Fox Sports, which hired him to be a spotter at local high school games. At the start, he was just 15, so his parents had to drive him to the job.

When he entered Chapman University, though, the real polishing began, he says. In the television journalism program, Schlom honed his reporting and camera skills. He recalls senior student editors letting him know when he “didn’t deliver” on Chapman News broadcasts. And he was pushed to tackle topics beyond sports. He produced and hosted Chapman News’ 2012 Election Night coverage, a live program that was awarded the Dodge College
Cecil Award
for Best Television Show.

“That night is still the proudest moment of my life and the toughest of all the things that I’ve done,” he says.

Sportscasting is still his primary love, but he applies his news side skills every time he steps in front of a camera, he says.

“I try to put the focus on the game, on the sport. Nobody tunes in to hear me,” he says.

But audiences are tuning in, or rather logging on. ESPN3, accessed through
ESPN.com,
the online platform of ESPN, is a digital service CNN Money describes as a “
secret web weapon
” for the sports network. It’s certainly keeping Schlom busy. Through February he’ll do play-by-play for both men’s and women’s basketball games. In March he’ll be assigned to do play-by-play at the Big West Women’s tournament scheduled at the Honda Center.  Schlom can think of no better place to be right now for someone with his aspirations.

“At this point I never thought I’d be where I’m at,” he says. “It’s great.”
broadcast journalism Dodge College of Film and Media Arts espn3 announcer Trent Schlom