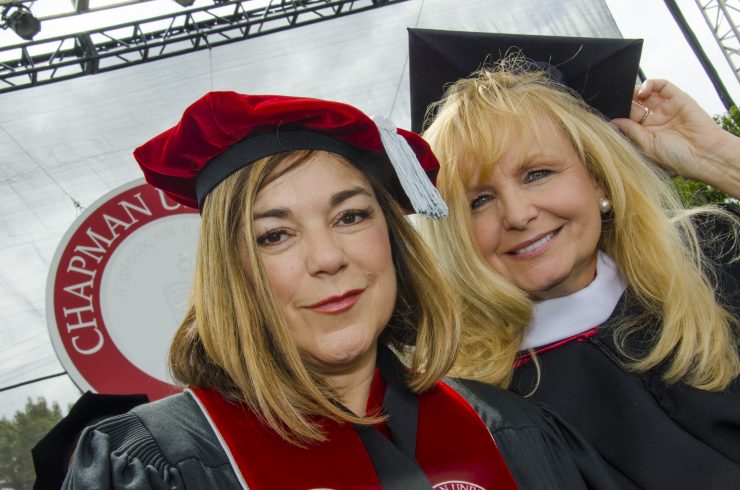 Panther in the House: Loretta Sanchez ’82

WEB EXCLUSIVE: #ChapmanStories video.
From her upset victory in 1996 to her current senior status, U.S. Rep. Loretta Sanchez ’82 pursues her passions for security on home soil, equality for women in the military and a healthy start for children in need.

From her upset victory in 1996 to her current senior status, U.S. Rep. Loretta Sanchez ’82 pursues her passions for security on home soil, equality for women in the military and a healthy start for children in need.

When she first ran for Congress in 1996, Loretta Sanchez ’82 imagined that she would “change a thing or two.” Then Sanchez won a razor-thin victory over longtime Republican Congressman Bob Dornan, and the one-woman energy machine from California’s 46th Congressional District kicked into gear. Soon the first Latina elected from an Orange County-based district became a leading voice on some of the major topics of the last two decades — homeland security, sexual assault in the armed services, women in combat, border security and funding for Head Start.

Now she is a senior member of the House Armed Services Committee, the most senior female member of the House Committee on Homeland Security and serves as the Ranking Member of the Tactical Air and Land Forces Subcommittee. She sponsored legislation that targets sexual assault in the military and has been a tenacious advocate for allowing women to serve in combat. Every year she helps drive extra funding into Head Start, the same development program for children and families that she herself benefited from as a shy preschooler. And she has survived numerous challenges for the seat, including a 1998 rematch with Dornan.

But even after all that, the Chapman University trustee, alumnae and faculty member — she teaches Women and Leadership in the Women’s Studies program — still relishes the routine home-office duties that fall to all members of Congress.

“Sometimes it’s just an individual person’s life — get back taxes that the IRS has tried to take from them, or get them decorations from when they were in the military, or help somebody get a disability claim through,” she said during an interview in her Congressional office in Washington, D.C. “And that completely changes their life. So in a way I change the world every single day, even if it’s for just one person. But I think that’s the most exciting thing. I didn’t realize that there’s so much gratification in being able to go out and slay the dragon, if you will.”

But it’s the slaying of much bigger dragons that has earned Sanchez national attention. From laws that improve port security to pending legislation that would link military officers’ promotions with their proper handling of assault claims, the safety of Americans and their service people has long been at the forefront for Sanchez. This summer she saw one of her biggest goals realized when the Pentagon announced that it was lifting the longstanding ban against women serving in combat.

The choice is still questioned among some in the military, but Sanchez, who was one of the politicians who spoke out on the subject of rape in the military in the Oscar-nominated documentary
The Invisible War
, says the decision is an acknowledgement of a reality that already exists in modern warfare.

“They’ve been there anyway. We’ve had 10 years of Iraq and Afghanistan where we’ve seen women on the front. They’ve been POWs; they’ve been killed in action. So it’s just right to say this is an old policy and we really need the skill set that women bring,” Sanchez says.

“They were telling me that women couldn’t do that job, that they didn’t see that happening, that it would be a problem. I sort of looked at them and said, ‘Or an opportunity. Because they’re coming.’ Women bring a good set of skills to that job also,” Sanchez says.

That’s a prime example of the Sanchez style, says friend and former college roommate Kathy McCarrell ’81, a Chapman adjunct professor of sociology and executive director of Heroes & Healthy Families, a nonprofit program serving veterans suffering with PTSD. McCarrell’s work on behalf of veterans was honored at Commencement 2013, when she was awarded the Harmon Wilkinson Award for Distinguished Contribution to the Humanities or Social Sciences.

“Loretta Sanchez is a trailblazer. She relentlessly pursued the cause of seeking justice for victims of sexual assault in our nation’s military, not willing to take no for an answer until changes were made. I have tremendous respect for her and her commitment to this basic human right. Even when we were roommates at Chapman, I could see her determination and drive. It has been a joy to see that play out on a national stage,” McCarrell says.

Now Sanchez is channeling that energy back to Chapman, where she and fellow trustee Joann Leatherby are leading the creation of The Institute for Women in Leadership. The institute will be a home for research and practical programming led by Wilkinson College of Humanities and Social Sciences and will include the Argyros School of Business and Economics and the Dale E. Fowler School of Law. Its launch is expected in spring 2014.

In addition to studying women’s roles in diplomacy and the military, the institute will support Sanchez’s vision of a more globally aware citizenry and perhaps a more peaceful world. Among her initiatives as a congress member is the Global Education Nexus In United States Act (GENIUS ACT), which provides grants to schools for activities that cultivate students’ global perspectives.

“I really believe that our children of today are global leaders of tomorrow,” she says. “I would prefer to have young people entering our diplomatic forces and our corporations who understand that working through problems is much better than going to war with somebody.”

Click on a thumbnail icon below to view the larger image.