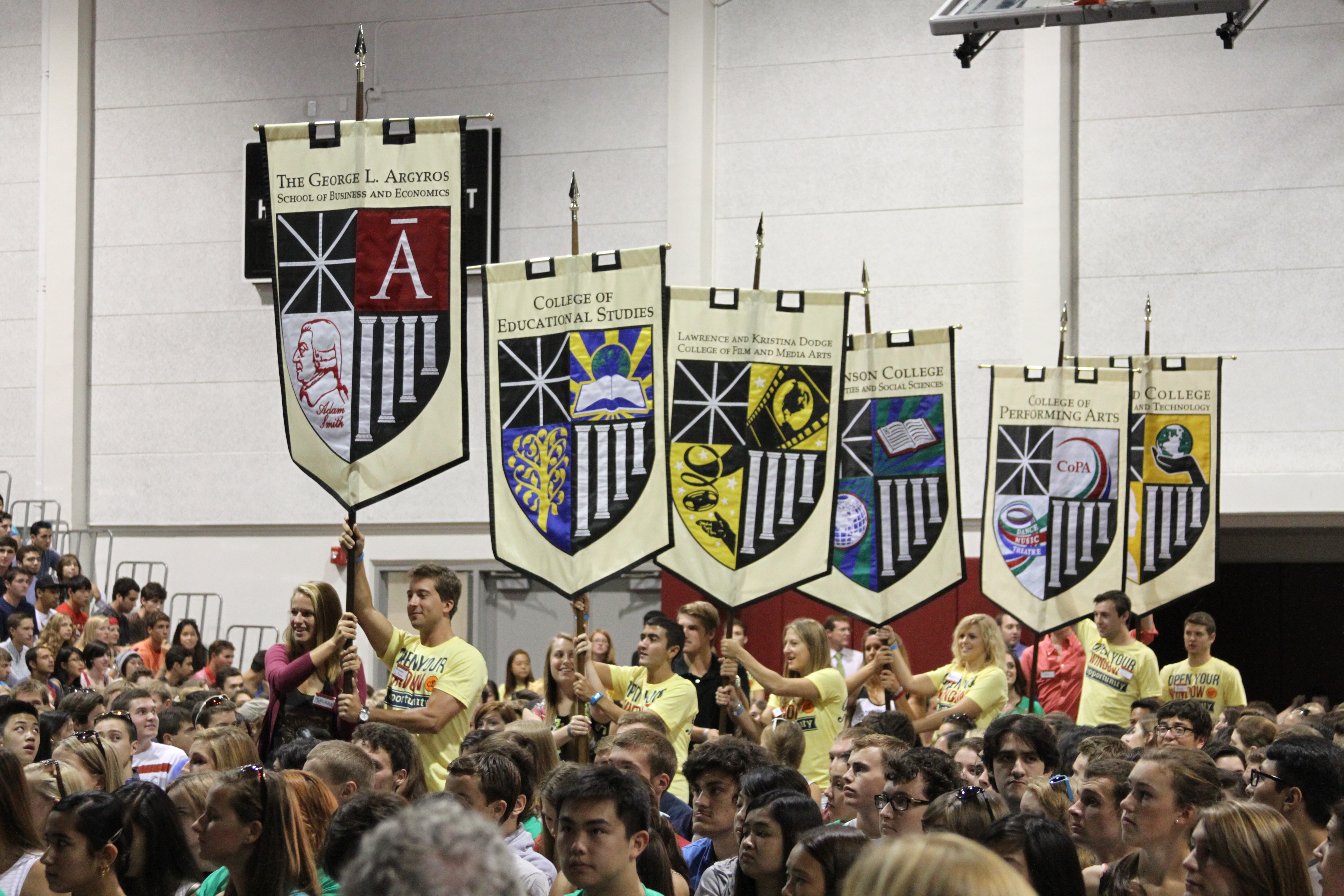 Student leaders process into Convocation 2013 bearing the banners of the six colleges and schools.
Campus & Students

An overflow crowd of freshmen and their families was formally welcomed to Chapman University with an invocation, speeches, stories and song during the university’s 153rd Opening Convocation held Wednesday, Aug. 21, in the Harold Hutton Sports Center.

The ceremony was the official launch of the 2013-14 academic year and ceremonial greeting of the freshman class of 1,300 students. As is tradition, the focus was on wise words delivered to the students by alumni, administrators and faculty.

President Jim Doti challenged students to step outside their comfort zones by trying new subjects or experiences they might never have imagined for themselves, jokingly comparing their first year of college to a Swedish smorgasbord. Give the “creamed pickled herring” a try, he said.

Chancellor Daniele Struppa called on students to use their college years to make as much of an impact on Chapman as the university will make on them.

“You are not tenants here at Chapman, you are shareholders,” he said.

The annual Aims of Education address, another Convocation tradition, was given by renowned author Richard Bausch, professor of creative writing in the Wilkinson College of Humanities and Social Sciences.

In his talk Bausch amused the audience with a tale from his young adulthood when he eschewed formal education and thought he had bested a college student at a party with his self-schooled wit. Upon learning that the student was studying psychology, Bausch snootily asked the collegian if he was familiar with the works of “Frood,” butchering the pronunciation of Sigmund Freud, the father of psychoanalysis.

When the student asked him if he meant Freud, the young Bausch snapped: “Him, too.”

“I have since found out the meaning of college,” he said. And key to the experience is not just finding “something to do with your life” but taking pride in the scholarly life, despite the pop culture habit of belittling intellectuals.

“This anti-intellectual stance is a strange paradox given the fact that the founders of the country were all, to a man — and to a woman, too, take a look at Abigail Adams’ letters to her husband — intellectuals. All of them,” he said.  “Similarly, we have the paradoxical fact that one of the prized aspects of present political life is a proudly announced intolerance of compromise, the statement that ‘I do not compromise,’ when in fact one of the reasons for our beloved country’s rise and its success has always been its particular genius for compromise.”

The full text of Bausch’s talk will be made available at the Aims of Education website.

New students continue a full schedule of orientation activities until the opening of classes on Monday, Aug. 26.