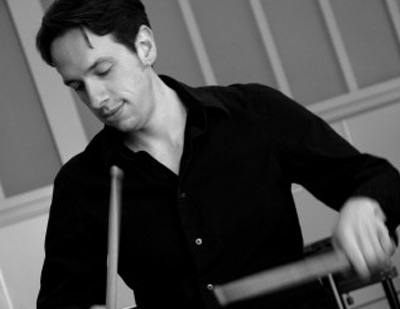 “To be nominated for the Grammy is such a honor, and everyone in the quartet, as well as the composers, Sean and Jeff, are feeling so blessed,” Terry said.

The other categories in which the album
received nominations
are Best Surround Sound Album and Producer of the Year, Classical (Marina and Victor Ledin).

Formed in 2008, the Los Angeles Percussion Quartet consists of musicians Matthew Cook, Justin DeHart, Eric Guinivan and Terry.  Since 2008, the LAPQ has championed the percussion-focused music of California’s great maverick composers, in addition to actively collaborating with tomorrow’s promising new artists from around the globe. Throughout California, the LAPQ have delighted audiences with fresh interpretations from the standard percussion ensemble repertoire, and many of their newly commissioned works have received awards from the FROMM Foundation, Theodore Presser Foundation, Broadcast Music Inc. (BMI), and the American Society of Composers, Authors, and Publishers (ASCAP).    The Los Angeles Percussion Quartet has presented concerts and educational events at such distinguished series as the Monday Evening Concerts, April in Santa Cruz, Pasadena Arts Council, L.A. Composer’s Project, and Music & Conversations; as well as numerous universities, including Chapman University, the San Francisco Conservatory of Music, University of Southern California, California Institute of the Arts, Occidental College, University of California Santa Cruz, and California State University Sacramento, East Bay and Bakersfield.

“Rupa-Khandha,” released on the Sono Luminus label, is available for purchase on the
record label’s website
, on
Amazon.com
and elsewhere online.  The package is a two-disk set, containing a Blu-ray™ Surround Sound disc as well as a standard CD.  “As one of the new percussion recordings produced in surround sound, the listener is placed among a sonic landscape of sublime, visceral and exotic percussion instruments, with the full force of the quartet’s technique and artistry applied in interpreting four evocative, award-winning, and never-before-recorded works,” says the record company’s description of the album.
chapman university Conservatory of Music Grammy Award Jeff Holmes Los Angeles Percussion Quartet Nicholas Terry Nick Terry Rupa-Khandha Sein Heim