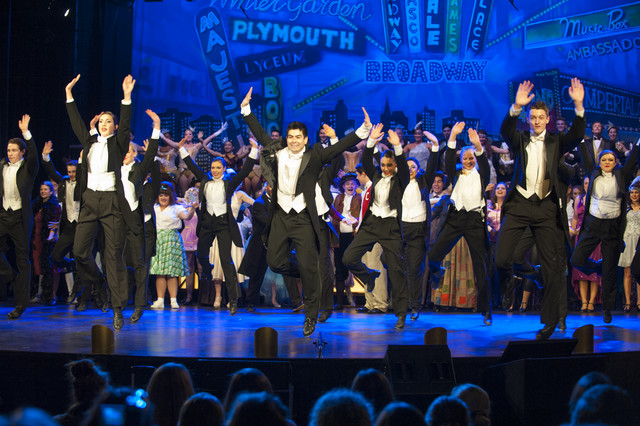 And the Saturday evening performance was also the setting for the surprise announcement that the Argyros Family Foundation has given an $8 million gift to Chapman University’s new Marybelle and Sebastian P. Musco Center for the Arts. The gift will name the center’s 1,050-seat main concert space the Julianne Argyros Orchestra Hall.

Trustee George L. Argyros ’59 – who has been a University trustee since 1976 and served as chairman of Chapman’s board for 26 years – said, “When Jim Doti approached us about honoring Julianne in this way, we immediately said yes.  It’s our 50th wedding anniversary this year, so I think by now I know her pretty well.  Her enthusiasm and personal involvement with the arts at Chapman and throughout Orange County have always been driving forces in Julianne’s life, and she is thrilled to have her name on this beautiful orchestra hall that will be so important in the education of so many talented students.”

Julianne Argyros, who made her annual appearance in the stage show alongside the 100-student cast, dancing with President Doti in a scene from The King and I, said the honor was an ideal anniversary gift.

“I am moved beyond measure at this honor,” she said. “This new orchestra hall will be home to so much amazing student talent, from musicians to dancers to actors and singers – it will become Chapman’s beacon to the entire arts world, and I am so proud to be a part of it.”

Another surprise was delivered by actor and activist Richard Dreyfuss, who received this year’s Lifetime Achievement in the Arts Award. On stage with President Doti, Dreyfuss said that if he could “twist this gentleman’s arm enough, I intend to teach here next year.”