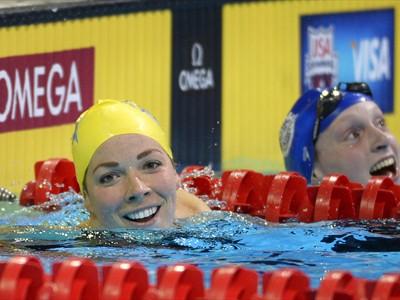 Kate Ziegler '13 is the second Chapman University student to score a spot on the 2012 U.S. Olympic Team.
Sports

Chapman University senior and world champion swimmer Kate Ziegler ’13 landed a second trip to the Olympics with a second-place finish in the 800-meter freestyle final at the 2012 U.S. Olympic Swimming Trials in Omaha, Neb.

The communications studies major competed in Beijing in 2008, but didn’t make the finals in the 400 and 800 freestyle events there. In a post-race interview this weekend she said she is eager for a second shot at Olympic medal competition.

“I couldn’t be more thankful to have another opportunity to go to the Olympics and I couldn’t be any more proud to represent my country again,” she said.

Ziegler finished Sunday’s qualifying race in 8 minutes, 21.87 seconds. At last year’s world championships, she took the silver medal in the 1,500-meter freestyle and the bronze in the 800-meter freestyle.

Ziegler is the second Chapman student to make the Olympic swim team this year. She joins Ariana Kukors ‘12, who captured a spot on the 2012 U.S. Olympic swim team Thursday night with a second-place finish in the 200 individual medley final.