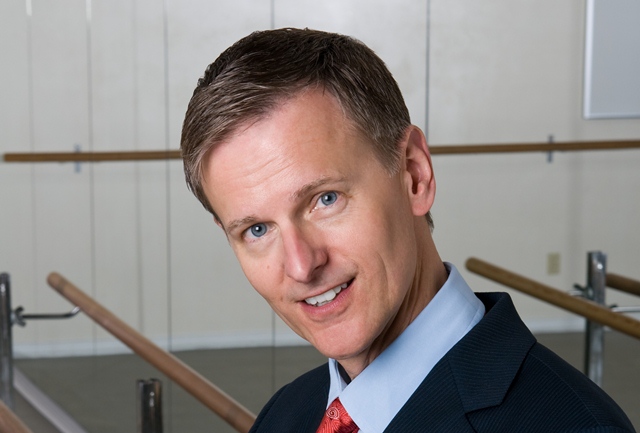 Dale Merrill, the newly-appointed dean of the College of Performing Arts.
Arts & Film

Dale Merrill, who has been serving as acting dean of Chapman University’s College of Performing Arts for the past two years, has been appointed dean of the college, the chancellor’s office has announced.

Professor Merrill previously served as chair of Chapman’s Department of Dance for five years, while also for one year of that period serving as co-chair of the Department of Theatre.   During that time, he led both departments to achieve national accreditation.  With the formation of the College of Performing Arts, Merrill was named its first associate dean.  In 2010, when William Hall, D.M.A., was appointed to the position of dean of the planned Chapman University Center for the Arts, Merrill was asked by the university to serve as acting dean of CoPA (where he was fondly dubbed “the Dancing Dean” by some wags).

Merrill has a rich background in arts administration, having served for 20 years as artistic director of Spectrum Dance Theater, a professional dance company and community arts educational facility in Seattle, Washington.  There he led the company to national prominence, performing works by Ann Reinking, Lar Lubovitch, Dwight Rhoden and Lynne Taylor-Corbett, among many others.  While in Seattle, Merrill received recognition and numerous awards for his community leadership, including the prestigious Corporate Council for the Arts Unsung Hero Award in 2002 and a 2001 “Rudy,” a national award presented by Safeco Insurance Company for community leadership and advocacy.

Merrill has more than two decades of choreographic credits, including the Macy’s Thanksgiving Day Parade, Fred Hutchinson Cancer Research Fundraising Auction, and “Voices Across America” starring Paul and Mira Sorvino for public television, in addition to numerous original works and musical theater productions.  He has been a guest teacher for Hubbard Street Chicago, Washington Contemporary Ballet, Seattle Center Academy of Arts & Sciences, University of Montana, UC Irvine and the University of Washington.

He is currently an active member of the National Association of Schools of Dance, where he is a committee member of the Board of Directors and has presented research and workshops on social media and the development of interdisciplinary programs.