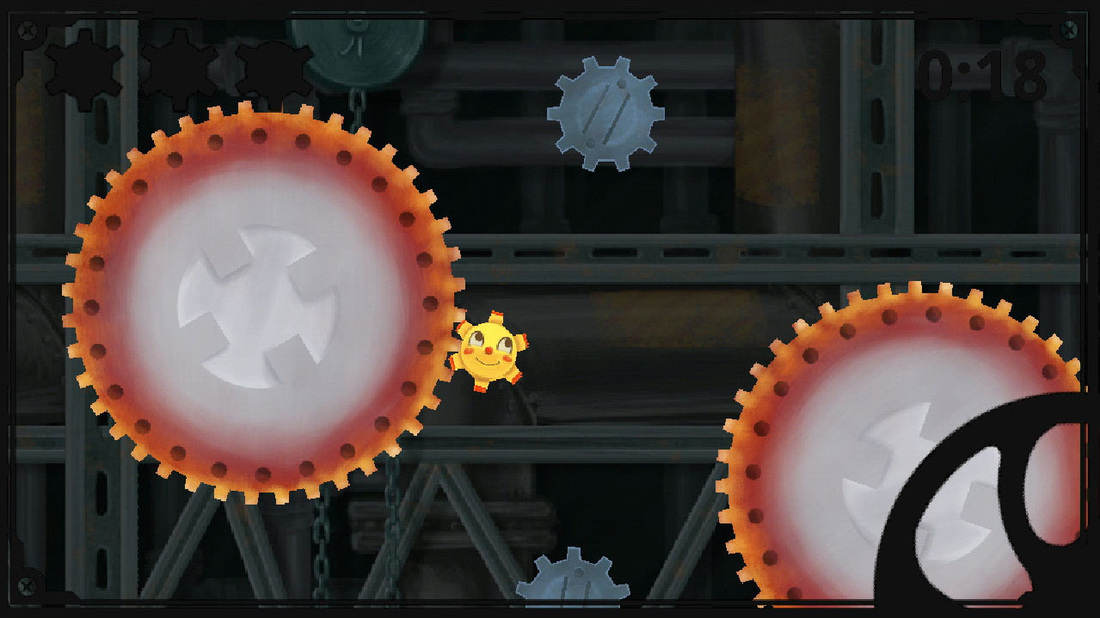 Like many people her age, Elizabeth Fiacco ’12 cut her video gaming teeth playing Nintendo’s Super Mario Brothers on her Gameboy, guiding the now-iconic little plumber through a host of jumping, fire-shooting and princess-rescuing fun.

Now Fiacco is the game designer for an interdisciplinary crew of computer science and digital arts students that won first place at the inaugural Intercollegiate Computer Game Showcase hosted in April at Chapman University. The Axle team bested teams from universities throughout Southern California with a game reminiscent of good old Mario.

“It was much bigger than we anticipated,” Fiacco says, describing what it was like to pitch the game to a full audience in the Folino Theater at Dodge College of Film and Media Arts. “It was awesome.”

The award-winning game, Axle, features a perky little yellow gear by the same name in what gamers know as a platform game, which typically requires the player to jump to and from a series of platforms to collect points, elude an enemy or win a race. In this case, Axle navigates a steamy, grinding and gear-crushing toy factory.

Fiacco said team members knew from the start that they wanted to work with the classic platform style.

“A lot of game designers are still using the same genre. It’s extremely popular, and even though that’s an old platform, we’re doing something new with it,” says Fiacco, who graduates this month with a major in digital arts from Dodge College of Film and Media Arts and a minor in game development from the School of Computational Sciences at Schmid College of Science and Technology.

The interdisciplinary crew of computer science and digital arts students combined diverse talents to create a colorful steampunkish world with precisely meshed gears. The story line is that Axle was created by a kindly toymaker and developed a knack for repairing broken things. This Pinocchio-like guy is soon on a mad dash through a toy factory, jumping from switch to switch to repair machinery before he gets crunched. That’s where the programming came into play, as the designers had to create complex software to perfect the movement and timing of the toy factory gears.

He cited the interdisciplinary environment at Chapman as a key element to the team’s success.

“It’s special. At Chapman, in particular, we’re focused on the concept of doing things in a collaborative, interdisciplinary way. This is just another example of being able to do that,” he said.

Such interdisciplinary connections will continue this summer. The Axle team, which includes seniors Lauren Gragg, Jessica Kernan, Alex Solano and Bryson Thill, was selected to participate in the Argyros School of Business and Economics’ eVillage business incubator program this summer. Their short-term plans involve polishing up the game for release. And in the long term?

“We want to start a game and app studio,” Fiacco says.