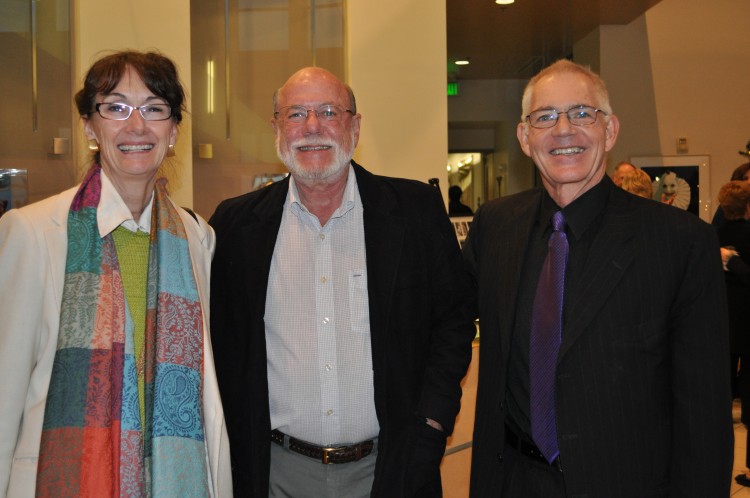 Boylan, speaking to those gathered in Folino Theater for the event, recalled being unsure of his decision to sign on to a small school that didn’t even offer a film and television studies major.

“When I came here in ’84, I was a little reluctant about taking a job at a small private college,” he said. “Man what a great ride this has been! How smart was I to take the job?”

Among the well-wishers recalling some of those earlier days was President Jim Doti, who called Boylan a “true renaissance man” and a model of Chapman University’s interdisciplinary spirit throughout his 27 years, teaching in both the English and science programs.

“I was always overwhelmed by his breadth of knowledge,” President Doti said.

The president also jokingly blamed Boylan for being the professor who got him “into a lot of trouble.” Boylan was the original mastermind behind the parody videos made each year for the staff appreciation awards that star President Doti. Along with Pamela Ezell, director of Panther Productions, Boylan also launched the KOCE television interview show
Economic Journal
, which has grown to become the weekly
Dialogue with Doti and Dodge
.

“It all started with Jay,” President Doti said.

But it was his work as a mentor and teacher that alumni will always treasure, said Laurie McLaughlin ’88.

“He didn’t just teach us what to do. He was truly interested in seeing us succeed,” McLaughlin said.

Similarly, Eli Reyna ’90 credited Boylan with helping him obtain a scholarship and seeing that he excelled.

“He really made sure I was successful after I came to the university,” Reyna said.

One highlight from that era also hails from another department when Boylan co-taught with Michael Griffith, Ph.D., professor, Crean School of Health and Life Sciences.

“The concept that Mike and I had was to not try and turn students into little scientists, but to make them scientifically literate,” he said. “I remember doing a presentation explaining specialized and general relativity to the students. I would always tell them that there was no math and when I was done they should be able to go home and explain it to their parents. And they could.”

For the future, Boylan plans to still be on campus frequently, thanks to the university’s phased retirement plan, and will continue working on the
Dialogue with Doti and Dodge
program.

And he has a very important lunch to schedule. He plans to take Barbara Mulch, now director of fellowships and scholar programs, to the same Thai restaurant where he interviewed with her some 27 years ago for that job that ended up being “a great ride.”
Dodge College of Film and Media Arts