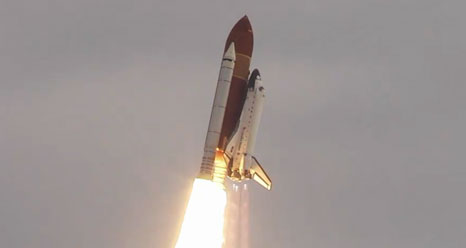 Never give up, as they say.

So Anna Leahy, Ph.D., associate professor of English at
Chapman University
, and Douglas Dechow, Ph.D., associate librarian at Leatherby Libraries, didn’t. The creators of the blog Lofty Ambitions, where they write about aerospace, aviation history and related issues, had hoped to witness one of the last space shuttle launches as the program retires. Weather and mechanical troubles fouled up their plan to see
Discovery
lift off in November.


Space Shuttle Endeavour
offered another chance, but delays followed again. Finally, good news — the shuttle blasted off, and Lofty Ambitions was there.

“How close we were to the actual space shuttle and to its last crew ever in history still boggles our Lofty Ambitions minds,” they write in their latest post. Check out their chronicle of events, photos and a video at
Lofty Ambitions
.