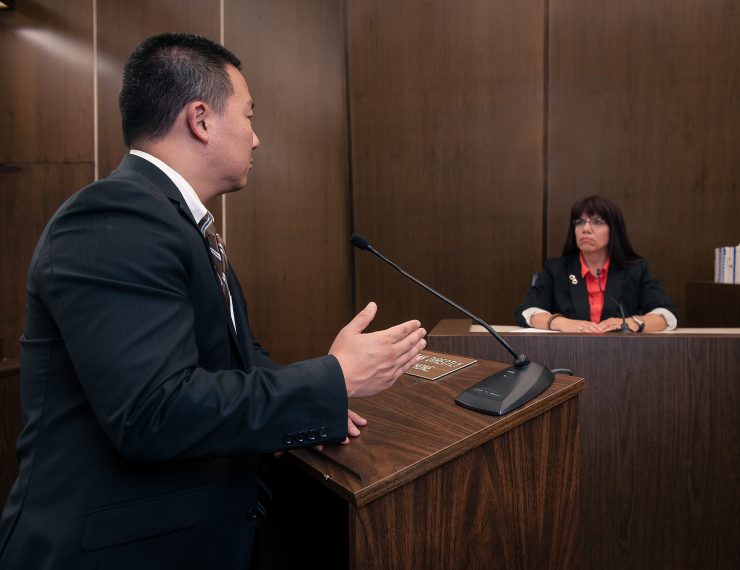 Ji Oh questions a law enforcement officer in an Orange County courtroom, hoping to lay enough foundation to put the defendant in the preliminary hearing on trial for their alleged crimes.

It looks like a routine legal proceeding, except that Oh isn’t a prosecutor – she’s a Chapman University law student. 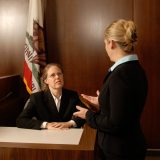 “Criminal law is by far the biggest draw for our students. A lot of them end up with the OCDA and also with the public defender,” says Marisa Cianciarulo, interim dean of the law school. “So when the Orange County District Attorney’s Office approached me with the idea for the clinic, I was excited about it – I thought it’d be great because we already have such a good relationship with them.”

“He was very enthusiastic about the idea of doing a similar clinic at Chapman,” Cianciarulo says. “He was thrilled that Keith was the one who’d be leading the prosecution clinic – Keith has a lot of respect in the community.”

Brown says that many Chapman students have interned with his office, and end up excelling there as practicing attorneys.

“We are excited to extend our relationship with Chapman students through the criminal defense clinic and give the clinic students an immersive experience with our office and our clients,” he says.

Each clinic, which is worth four credits, has about 10 Chapman law students to allow for one-on-one supervision. There is a weekly seminar in addition to working with clients and cases.

“It’s really successful in terms of bridging the gap between theory and practice,” Cianciarulo says.

“I think what makes our clinics unique is that the agencies, at least OCDA, came to us because of how impressed they are with our students,” she adds. “I think it really speaks a lot to the quality of our students and to the strength of the relationships that this law school has with the legal community.”

Oh, a third-year student, hasn’t settled on a focus area for her studies and law career but loved her first-year criminal law class, which was taught by a defense attorney. When she heard about the prosecution clinic, she applied.

“I knew whether or not I’d pursue this route, it was going to be good experience,” she says. “It’s pretty rare for a law school to do these things and to be in a courtroom setting.”

The district attorney and public defender offices already have student internships, and the district attorney has a post-graduate fellowship. But the new clinics offer a seminar and are held during the school year. To participate in the clinics, students must be certified by the state bar to go on the record in court.

Third-year student Steven Gil (JD ’23) got to argue against a defense motion to suppress evidence in a felony drug possession case. If the defense had won, the prosecution’s main piece of evidence would have been thrown out, Gil says.

“The person was held to answer, and I never would have gotten to do that without the clinic,” he says.

Gil, who is entering law as a second career after serving in the military and law enforcement, says he signed up for the prosecution clinic as soon as he heard about it.

“I’d always been interested in the prosecution side, the law enforcement side of it, but I’d never had a chance to work directly with DAs. It was definitely something I wanted practical experience in,” he says.

Prosecutors have been “really encouraging – they helped me when I was given real case briefings, motion work,” Gil says. “I certainly wouldn’t have gotten that anywhere else, at least not in academia.”

“If you look at law schools across the nation, there are very few clinics devoted to criminal prosecution,” Bogardus says.

When Brown came back to the public defender’s office to run the Chapman clinic, it was decided he’d have his own caseload, since public defenders represent individual clients. He plans to focus on misdemeanors for several reasons, one being the ability to meet with clients who are out of custody.

“For the students to really have the full experience with the client, they need to spend time with the client,” says Brown, who was the second-ranked attorney in the public defender’s office before retirement.

The public defender recently got funding to hire Chapman students as soon as they pass the bar, he says.

Oh says the clinic’s biggest benefit has been the confidence it’s given her.

“The atmosphere really helps, the camaraderie – they normalize it for you,” she says.

Gil appreciates learning from prosecutors who work in specialties during the clinic’s seminar.

“It’s a great feeling you’re learning from the best of that group and you get a great understanding of the life of the case,” he says.