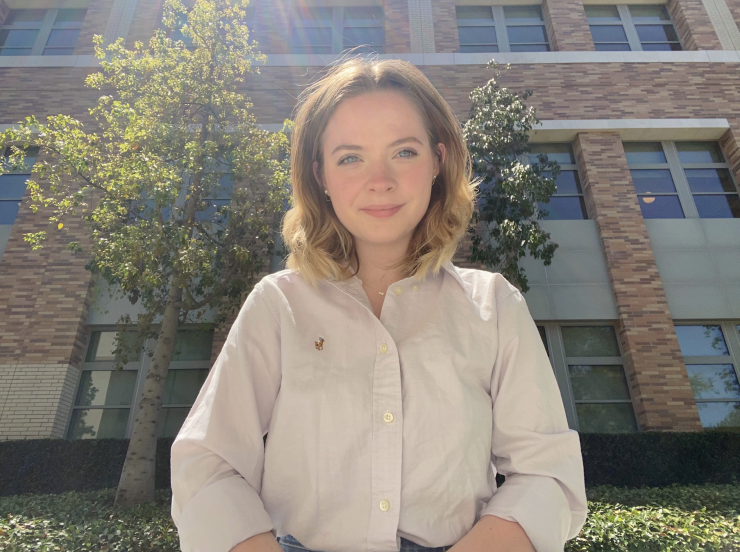 Alexis Reekie ’23 is Ready to Lead Chapman Student Experience as SGA President Reekie shares more about her journey at Chapman and her goals for the future.

Alexis Reekie ’23 was voted the new president of the Student Government Association (SGA) for the 2022-23 academic year.

We asked her a few questions about her involvement on campus, along with her future goals and advice for students looking to learn more about Chapman and SGA.

What are you studying at Chapman?

I am triple majoring in political science, philosophy, and (self-designed) law and the liberal arts.

How did you get involved in SGA?

I first got involved in SGA during the spring semester of my first year. There was a special election for the Academic Student Organization Senator position, and I thought it would be a great opportunity to get more involved on campus. I ran for the position and have been involved in SGA ever since. Last year I served again as the Academic Student Organization Senator and as Speaker of the Senate.

What are your goals as student government president?

One of my primary goals as Student Government Association President is to ensure that every student on campus feels supported by SGA and knows that we are a resource for them. Another goal is to increase campus-wide awareness of SGA’s resources and to encourage all undergraduate students to interact with SGA — whether this is through elections, utilizing SGA’s opportunities, or by reaching out to their respective Senators or to members of the Executive Council.

What are your career goals?

Following my graduation from Chapman, I plan to attend law school and pursue a career in economic and financial law.

What has been one of your favorite parts of being a student at Chapman?

One of my favorite parts of being a student at Chapman University is the support that faculty and staff provide to students in their endeavors. I am quite grateful for the guidance I received in my pursuit of self-designing a major, founding the undergraduate law review, reimplementing the Political Science and Philosophy honors societies on campus, and in conducting research. I believe Chapman is quite unique in its ability to allow its students the space and opportunities to make the most out of the short time we are undergraduates.

Do you have any advice for students wanting to get involved on campus or in SGA?

The biggest piece of advice I would give to students who want to get involved on campus would be to try everything you are interested in until you find an organization or group that aligns with what you are looking for. Attending meetings or reaching out to members of a club or group can be a great way to see if that organization is a good fit for your interests. One resource to do this would be through Engage (the university’s student organization hub) or individual clubs’ social media accounts. There are opportunities ranging from clubs centered around philosophers, accounting, public relations, and many more areas of interest. Further, if you have an interest that you do not see represented in the existing opportunities, do not be afraid to create your own club or organization. Although it may seem like a daunting task, odds are that if you have a desire to be involved in something on campus that does not already exist, other students do as well.

My advice for students who are hoping to be involved with the Student Government Association would be to keep an eye on our social media pages and announcements regarding open positions. SGA has positions ranging from finance, public relations, elections, and representations for each of the colleges in our Senate. I would also advise students to reach out to the current members of SGA with their questions and to learn more about the positions — we are always looking to get to know the students at Chapman!