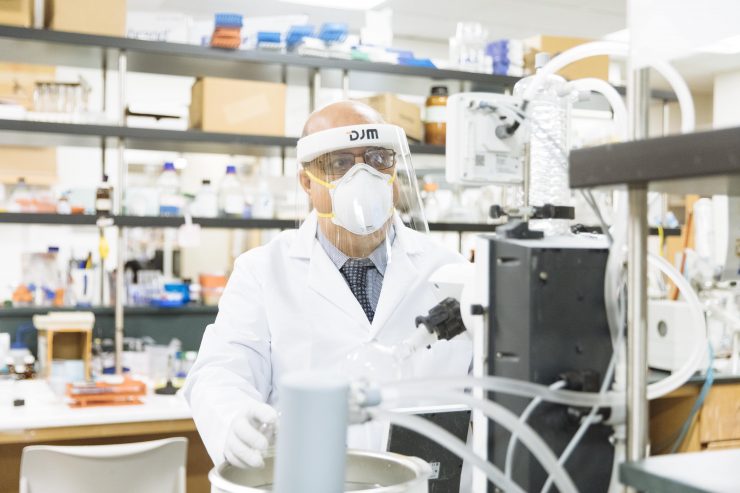 Keykavous Parang, Pharm.D., Ph.D., a professor in Chapman’s School of Pharmacy, has found early success with a strategy that could boost remdesivir’s longevity, greatly simplifying the process and trimming the expense of treating SARS-CoV-2, the virus that causes COVID-19.
School of Pharmacy

Remdesivir is one of the few therapies approved by the FDA for the treatment of COVID-19 in many high-risk and hospitalized patients. But like a precious prima donna, the drug is not easy to deal with.

Hamstrung by a short half-life, the antiviral drug quickly degrades in the bloodstream, so it must be administered in a cycle of repeated dosing delivered intravenously for up to 10 days, requiring costly hospitalization.

A Chapman University scientist is working to overcome that problem. Along with research partners at Georgia State University, Keykavous Parang, Pharm.D., Ph.D., a professor in Chapman’s School of Pharmacy, has found early success with a strategy that could boost remdesivir’s longevity, greatly simplifying the process and trimming the expense of treating SARS-CoV-2, the virus that causes COVID-19. The findings could even help advance the development of oral remdesivir, allowing at-home treatment for many patients.

The research, funded by grants from AJK Biopharmaceutical and the National Institutes of Health, was published in September in the European Journal of Medicinal Chemistry.

“We started this project because we know that COVID-19 is going to stay with us for several years, considering the challenges of mass production of vaccines for worldwide distribution, the need for boosters and that there is vaccine hesitancy among some populations,” Parang says.

So the scientists went after the antiviral’s main challenge – its short half-life. Approximately one hour after infusion, remdesivir’s concentration drops by half, which is why a course of treatment typically takes several days.

Drawing on similar work with anti-HIV  and anticancer drugs, the researchers paired remdesivir with fatty acids. Within this mixture – called a conjugate – remdesivir stabilized and gained endurance. In their lab experiments, 78% of the remdesivir conjugate had still not degraded four hours after contact with blood plasma.

In addition to sustaining the antiviral strength, the lipid properties of the fatty acids also helped as a kind of transport vehicle, so to speak, helping the conjugate cross cell membranes and go directly to its target, which could also improve patient outcomes, Parang says.

The scientists also tested the conjugate against Ebola virus and found that it improved remdesivir’s effectiveness against that virus as well. Thus, the remedesivir conjugate may have an application for the treatment of other viral infections.

Next steps for the team are animal and human studies.

Repurposing drugs has long been one of Parang’s research interests. His work includes an adaptation of anti-HIV drugs as antiinflammatory agents to treat  macular degeneration, a major cause of blindness among seniors.

Such endeavors make good sense because approved drugs are well tested and come with data on activity, toxicity and formulation, trimming both the time and cost of repurposed formulations, he says. The battle against COVID-19 makes these tactics all the more valuable.

“We are in an emergency situation,” he says. “We really need better treatment options because people are still going to get infected and end up in the hospital.”