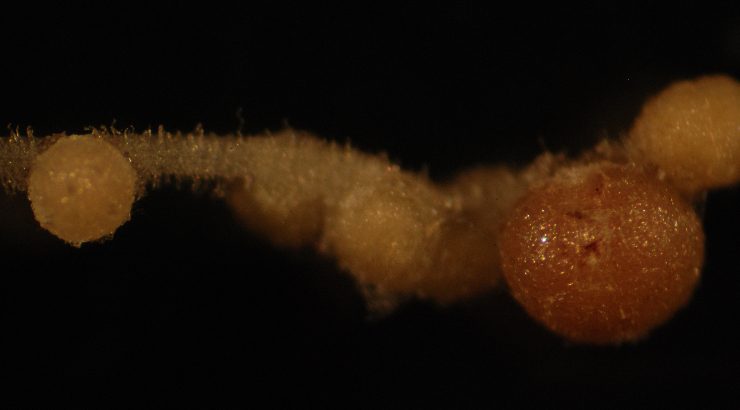 A cluster of nodules on the roots of the plant Lotus japonicus. Bacterial rhizobia are housed within root nodules and supplied with carbohydrates from the host plant. The carbohydrates are used by rhizobia in exchange for the fixation of nitrogen then used by the plant. (Photo credit: K. Quides)
press-release

Orange, Calif. – The mutually beneficial relationship between legumes and rhizobia, the nitrogen-fixing soil bacteria that make their home in legume root nodules and create nutrient-rich fertilizer for them, is one of the most well-known and agronomically important examples of symbiosis. New research from Dr. Kenjiro Quides, a Postdoctoral Teaching and Research Fellow in the Grand Challenges Initiative at Chapman University, tested the boundaries of this relationship — and found that it’s not always as perfectly harmonious as previously thought.

The results are reported in a new paper in the journal Evolution.

Legumes provide carbohydrates for rhizobial bacteria that live in root nodules, while the rhizobia fix atmospheric nitrogen into a form that’s usable for the legume (nitrogen is often a limiting nutrient for plants). In theory, if legumes have greater root nodule growth, they should be able to host more rhizobia, which should produce more nitrogen and enable larger plant growth in general.

The investigation then turned to the rhizobia. The size of the rhizobial population, a standard measure of bacterial growth, was found to continue to increase as the number of nodules formed increased. This suggests a hidden conflict in the symbiotic relationship. It seems that the legume and rhizobia interests are only aligned until the host optimum is reached, a point at which their interests diverge. This provides support for the conclusion that in the symbiotic relationship, rhizobia have an evolutionary advantage.

The results demonstrate that to avoid conflict in symbiotic relationships, hosts must tightly regulate their investment into symbiotic organs (like legumes’ root nodules) to maximize their own benefit-to-cost ratio of associating with their symbiotic partner.

“Legumes seem to play a balancing act to maximize their growth, but rhizobia continue to grow and that is a really exciting result,” Dr. Quides said.

He noted that this study opens the door to more research. “Although we found diminishing returns for the host from nodulation, the fact that rhizobia population size continued to increase is promising. We found the costs outweigh the benefits at high nodule numbers. However, if we can increase the number of nodules and therefore the rhizobia population size while minimizing the cost to the plant, we have the potential to increase the productivity of legume crops in the future.”

The title of the paper is “Dysregulation of host‐control causes interspecific conflict over host investment into symbiotic organs,” and is available online at: https://doi.org/10.1111/evo.14173. In addition to Quides, the co-authors at UC Riverside are: Fathi Salaheldine, Ruchi Jariwala, and Joel L. Sachs. The study was funded by the National Science Foundation, the Grand Challenges Initiative at Chapman University, and the University of California, Riverside Department of Evolution, Ecology, and Organismal Biology (Loomer and Newell Awards).

Founded in 1861, Chapman University is a nationally-ranked private university located in Southern California. Chapman is categorized by the Carnegie Classification as an R2 “high research activity” institution and offers personalized education to more than 9,000 undergraduate and graduate students. The campus has produced a Rhodes Scholar, been named a top producer of Fulbright Scholars and hosts a chapter of Phi Beta Kappa, the nation’s oldest and most prestigious honor society. Based in the City of Orange, Chapman also includes the Harry and Diane Rinker Health Science Campus in Irvine. In 2019, the university opened its 11th college, Fowler School of Engineering, in its newest facility, Keck Center for Science and Engineering. Learn more about Chapman University: www.chapman.edu. 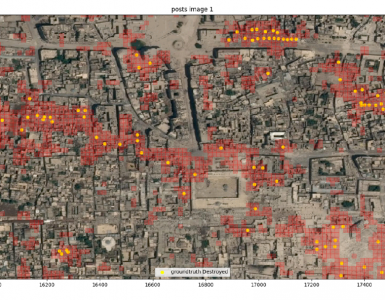 The following is a statement Dean of Students and Vice President for Student Affairs Jerry Price sent to the Chapman University community on Tuesday, April 20. The past year has been a significant time for this country... 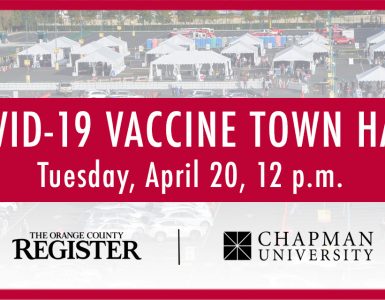