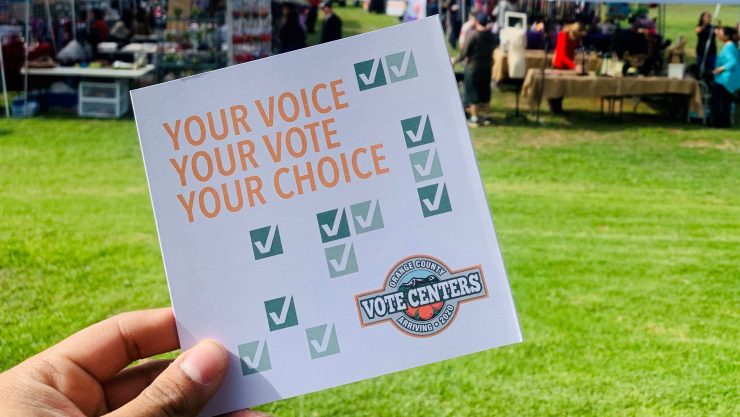 During fall election season,  Chapman University’s Civic Engagement Initiatives hosted an OC Registrar of Voters’ Vote Center in Argyros Forum 119AB. The Vote Center was open from October 30 to November 3 (election day). The Vote Center was a full-service voting resource center where you could register to vote in Orange County, drop off a mail-in ballot, vote in-person or have any of your registration/voting questions answered by Vote Center staff.

The presence of the Vote Center on campus was a key part of campuswide get-out-the-vote efforts and Chapman’s longstanding tradition of political and civic engagement. “In our efforts to get full student voter participation, we see the opportunity to host a Vote Center as key to achieving that goal,” said Justin Koppelman, Ph.D., associate director of Student Engagement.

“With the State of California allowing for same-day voter registration and Chapman providing the ability to do that on-campus before or after classes, we’re able to mitigate many of the logistical barriers, challenges or mistakes that might otherwise prevent a student from voting.”

To further support the campus community during election season, Civic Engagement Initiatives compiled a list of resources to help understand the 2020 election results, engage in constructive discussions about politics and learn more about civics and the democratic process.

Thanksgiving Day may look different for all of us this year around, but one thing you don’t have to scale back on is the turkey you eat!   To help you get started on your Thanksgiving Day cooking, Working@Chapman brings...

Musco Center for the Arts is ushering the holiday season with their one-of-a-kind holiday tree on display at South Coast Plaza’s “Pavillion of Holiday Trees” auction. Musco...