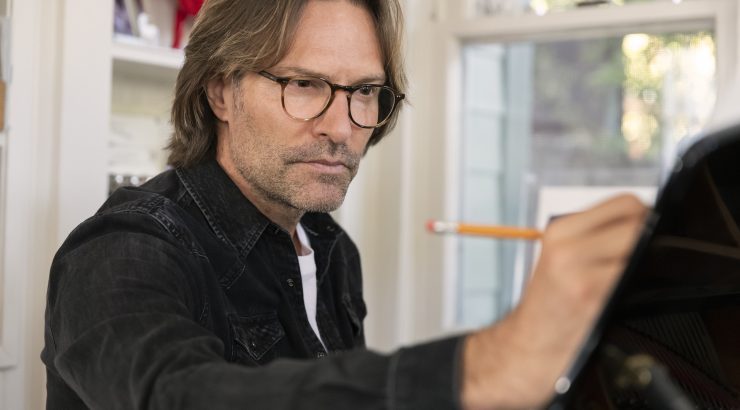 Jean Taber
5 min read
From his home in Los Angeles, Whitacre, whose humble demeanor belies his rock star status in the composing world, spoke at length about his musical background and career and gave students valuable insight on his approach to music composition.“It was truly incredible to have such an intimate experience with someone I appreciate and respect so much,” said Reece Huff, a business administration major and general music minor. “Being able to talk with Eric like that is something I won’t soon forget, and it definitely brightened up my quarantine!”

The idea for the virtual chat emerged between Whitacre and Louise Thomas, DMA, director of Chapman’s Keyboard Collaborative Arts (KCA) program and associate dean of the College of Performing Arts (CoPA), shortly after California’s COVID-19 stay-at-home orders were announced.

“Eric and I met when I was performing with the Los Angeles Master Chorale at the annual High School Choral Festival, which culminates every year in a Disney Hall performance with roughly 800 high school students,” said Thomas. “We got to know each other more closely last December when I rehearsed his new chamber opera, “The Gift of the Magi,” featuring Belgian soprano Laurence Servaes.”

“We were in the process of discussing future collaborations when the COVID-19 crisis forced everyone into a remote learning situation. Nothing daunted, Eric offered to speak with our Chapman students over Zoom and at that point, I contacted our choral and composition faculty to see how we might open this to a wide group of music students,” said Thomas. 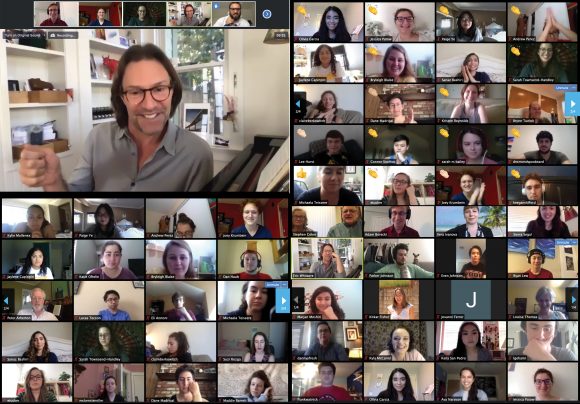 The chat session took place during the regularly scheduled class meeting time for the Chapman University Choir and Treble Choir, led by Dr. Stephen Coker and Kyla McCarrel, respectively. Students from Dr. Vera Ivanova’s composition seminar and Thomas’s KCA program were also invited to attend. Director of Music Technology Adam Borecki managed the technical side of the session and served as moderator.

Chapman piano performance sophomore Paige Ye found great encouragement in Whitacre’s words. “Our meeting with Eric Whitacre served as a reminder of the role of musicians during this historic time,” she said. “Many of us were saddened over all our performances being canceled, but Eric reminded us that we are not alone and that we can use our music to stay connected and united. People need musicians, just as us musicians need audiences.” 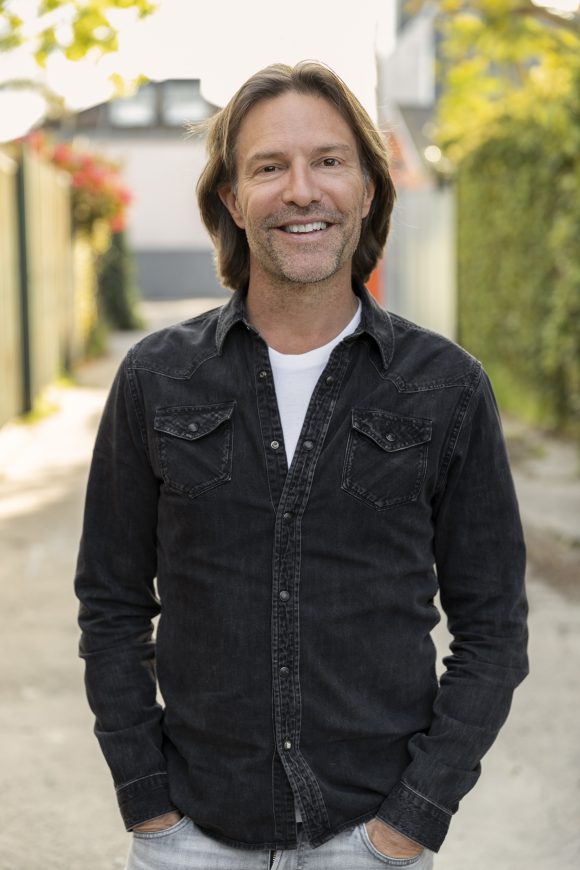 A Choral Geek of the Highest Magnitude

A master’s degree graduate of The Juilliard School of Music, Whitacre’s musical journey began like many students: in his high school marching band. His undergraduate college music experiences revealed a world of possibilities, especially in choral music. Perhaps the most pivotal moment for Whitacre was singing Mozart’s Requiem in the choir. “It was like seeing color for the first time,” he writes, “and I was regularly moved to tears during rehearsals, crushed by the impossible beauty of the work. I became a choral geek of the highest magnitude; I mean I lived for rehearsals and performances…”

Whitacre was subsequently inspired to write his first choral composition, “Go, Lovely Rose,” dedicating it to his choral director David Weiller, who was a significant influence in his music education. The work and its two companion pieces were soon published, and then the commission requests for his music started coming in. The rest, as they say, is history.

Claire Manson, a first-year vocal performance major, came away inspired by Whitacre. “He advised us to not be afraid of what others may think about our own creations and compositions, but rather compose what we ourselves want to hear. This explains why his music is so unique and captivating,” she said. “I find it fascinating how he comes up with specific chords for his compositions. Mr. Whitacre explained how the chords make him ‘feel’ a certain way. In his piece Cloudburst, for example, he said how ‘that chord sounded the way rain made me feel.’ Overall, he has inspired me personally to look deeper into music and further appreciate its value and unlimited abilities.”

Whitacre has collaborated on projects ranging from film scores (Pirates of the Caribbean: On Stranger Tides; Batman vs Superman: Dawn of Justice; Deep Field: The Impossible Magnitude of our Universe) and pop music (Laura Mvula, Imogen Heap, Annie Lennox) to commissions by major classical organizations including the BBC Proms, Minnesota Orchestra, Cincinnati Pops, Rundfunkchor Berlin, National Symphony Orchestra, The Tallis Scholars, Chanticleer and The King’s Singers. His original musical, Paradise Lost, won both the ASCAP Harold Arlen Award and the Richard Rodgers Award, and earned ten nominations at the Los Angeles Stage Alliance Ovation Awards. He served five years as Composer in Residence at the University of Cambridge, UK, and recently concluded a two-term residency with the Los Angeles Master Chorale.

In 2009, Whitacre was inspired by a young fan’s social media post to create his ground-breaking Virtual Choir (VC) program using technology to unite singers from around the world. What began with 185 people in VC1 has exploded to over 28,000 singers from 127 countries now registered to upload their videos for synchronization into one single performance: VC6 “Sing Gently,” which will go live in the coming months.

“It was a truly wonderful session,” recalled Thomas. “Engaging, compelling, with lots of practical advice. It was a real boost to the students at this challenging time.”

Nationally recognized Top 100 trial lawyer and Chair Emeritus of Chapman University’s Board of Trustees Wylie A. Aitken has established a new professorship to support a faculty member whose teaching, scholarship and/or...