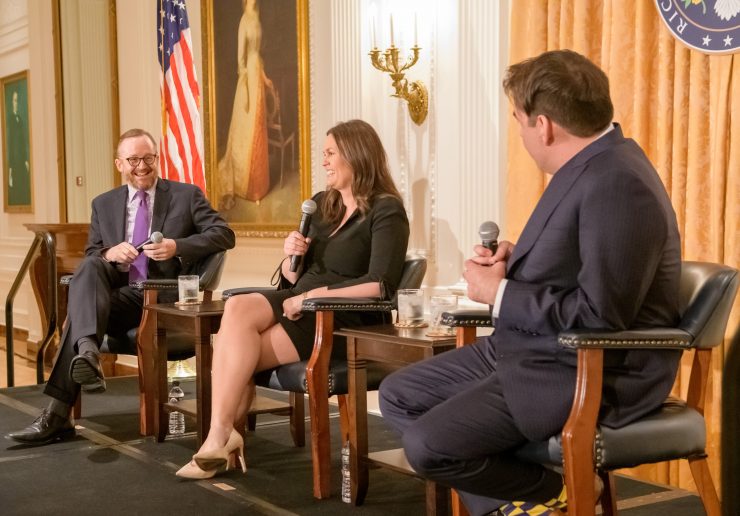 Things have grown a bit raucous out in the public square lately. Fiery rhetoric shuts down controversial speakers on university campuses, bipartisanship discussions seem like a quaint notion from days of yore, and every morning dawns with a commotion of social media that passes for vetted news.

Chapman University’s new Center for Freedom of Expression and Media Integrity steps into this noisy national conversation with a mission to advance civil discourse. The center is essential and timely, said the center’s dean, speaking at its November launch event.

“Free speech in America is at a crossroads, and the battleground for its future exists on college campuses and in the (media) outlets,” said Lisa Sparks, dean of the School of Communication, where the center is housed. “Our goal is to advance a free media while at the same time monitor and challenge the media bias and assaults on free speech. That is the core of the center.”

The center formally launched with a debate on the role of media in American politics, partnering two former press secretaries from the Trump and Obama administrations.

The event at the Richard Nixon Presidential Library & Museum in Yorba Linda featured Robert Gibbs, who served as Obama’s press secretary, and former Trump press secretary Sarah Huckabee Sanders, whose invitation sparked criticism and support from throughout the Chapman community. Critics complained that Sanders was not truthful with the press and undercut the role of journalists to inform the public. Supporters countered that her sparring with the media was necessary to defend the president and his administration.

Center organizers took the reaction in stride, though, and counted it as an especially apropos beginning.

Indeed, controversy came to the table early in the discussion, moderated by Brian Calle, the center’s executive director, a Chapman Presidential Fellow and the former opinion editor of the Southern California News Group. Reading a question submitted from the audience, Calle asked Sanders, “Why should we have you come and speak if you view the press as the enemy of the people?” referencing her 2018 clash with CNN correspondent Jim Acosta, who challenged Sanders over the president’s criticism of the media.

“I actually don’t view the press as the enemy of the people and haven’t stated that. What I have said is that I think there is a big problem with fake news on both sides,” Sanders said.

“Fake news is information that is not correct, that is not accurate or is purposelessly misleading or laced with so much opinion that it is not news,” Sanders said.

Gibbs defined it as a product of shadowy websites that circulate wholly invented stories, such as false reports claiming Obama was born in Kenya or that there were thousands of uncounted ballots hidden in an Ohio warehouse. The term is widely misused, he said.

“The definition of fake news has been matriculated and widened in a potentially very dangerous way. I get worried that we expand this definition into news where there’s a mistake or news we don’t like,” he said.

In addition to programs similar to the launch event, the center will conduct research, monitor media and free expression and host a chapter of Bridge USA, a national organization that fosters civil dialogue on college campuses.

Center for Freedom of Expression and Media Integrity Magazine2020-02