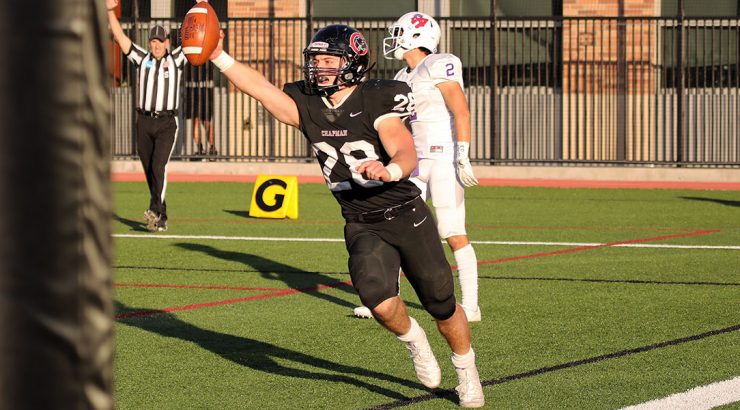 The Chapman University football team had never had an undefeated regular season but went 9-0 in 2019. They went on the road for their first two postseason appearances but were chosen to a host a First Round game in 2019. They had never won a playoff game but took down No. 20 Linfield 68-65 in triple overtime to advance to the Second Round of the NCAA Division III Football Championship.

A game that went back and forth boiled down to the Chapman defense getting the stop on third-and-six from the nine-yard line to start the third overtime period and force a field goal. After converting a first down, sophomore Tanner Mendoza broke through the line, broke a tackle on the left side and raised the ball in celebration as he sprinted into the end zone for the game-winner.

The Chapman bench streamed onto the field as Mendoza crossed the goaline for the 68-65 win. The back and forth game featured over 1100 yards of offense and 19 total touchdowns. The Panthers took the initial 14-0 lead with a defensive touchdown to open the scoring but saw that disappear when Linfield took a 34-28 lead early in the third.

The Panthers reclaimed the lead at 41-34 but the teams traded touchdowns over the fourth quarter. Chapman appeared to have the game clinched in regulation when sophomore Wyatt Hardin hauled in a 10-yard touchdown pass with 1:10 remaining. However, junior Wyatt Smith and the Linfield offense marched down the field with Artie Johsnon sprinting into the end zone with just four seconds remaining to force overtime.

After trading TDs in the first overtime, the teams traded big plays in the second OT. Junior Dillon Keefe, who had already scored a defensive touchdown and rushing touchdown, threw a 25-yard touchdown to sophomore Spencer Corona for a 62-55 lead. The Wildcats responded with a one-play drive of their own to even the score.

Mendoza ran in the game-winning TD in the third OT to finish off his day with 173 rushing yards to go along with another 29 receiving yards. Corona had a career day with 180 receiving yards on eight catches with a TD. Hardin caught two touchdowns while junior Nico Ragas hauled in four passes for 74 yards, including a 60-yard TD.

The Panthers rushed 232 yards and threw another 345 yards. Sophomore Reed Vettel was 14-of-19 for 175 yards and one TD in overtime. Junior Jonston MacIntyre was 9-of-16 for 141 yards and two touchdowns.

Chapman outgained Linfield 577-547 on offense and the defense forced three turnovers while the offense did not turn it over once. Senior Nathan Parkin was back to taking the ball away with a forced-then-recovered fumble and an interception in the red zone.

Keefe had 10 tackles to lead the defense with a blocked PAT and a scoop-and-score touchdown. He also ran the ball twice for 10 yards and a touchdown while throwing the ball once for a 25-yard TD. He also had one of Chapman’s four sacks.

The Panthers advance to play St. John’s next Saturday. The sites of the second round games have yet to be released by the NCAA.

Join President Daniele Struppa on Friday, August 7 at 2 p.m. PDT for a Leadership Town Hall to learn more about the budget reduction planning. Joining President Struppa will be Trustee and Chair of the Finance and...