Our world-renowned film school offers undergraduate and graduate degrees that will prepare you for careers in every branch of the industry. 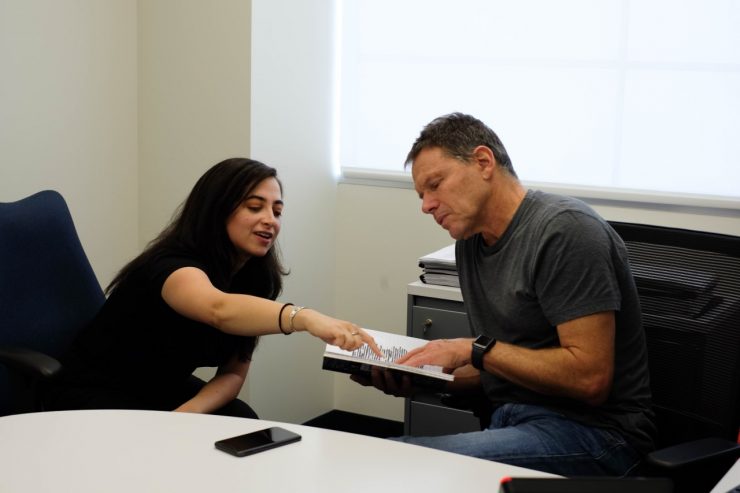 Samantha and Bill Gerber discuss her script during one of their weekly meetings.
Arts & Film

An Industry Professional is Born Thanks to mentorship from 'A Star is Born' producer Bill Gerber, this Chapman film student is ready to succeed in a competitive industry.

It’s a rare experience, especially for a student, to get personal feedback and guidance from someone like Bill Gerber, who’s produced more than two dozen feature films. Samantha Ferrand, who’s pursuing her MFA in Film Production at Chapman University’s Dodge College of Film and Media Arts, not only got that opportunity, but is using it to push her art and professionalism to the next level.

Ferrand is working with Gerber as part of Dodge College’s Filmmaker-in-Residence program, which brings in filmmakers every semester to work with 10 selected students. Within the first two weeks of the program, she presented the accomplished producer with a finished script for a feature-length film. Since then, she’s learned how to market and pitch her movie to executives.

“It’s those concrete lessons, like budgeting, marketing and packaging that I’ll carry into my career,” she says.

First Impressions are Everything

“I was pretty intimidated,” she remembers about her first one-on-one meeting with Gerber. “I mean, here’s the guy that produced “A Star is Born.” Within a week, she rushed to print her script for Gerber, handing it to him with shaky hands.

His reaction wasn’t what she expected. “Are you sure you want me to read this?” Samantha remembers him saying. “If people in the industry will read it, you only get that first read. I’ll read it if you want me to, but it’s ok to say you need more time.”

Recalling that moment, Samantha says, “It was a great lesson to learn. You have to make your script’s first impression count. You’re never guaranteed a second chance.”

She took another week to put in some finishing touches, giving the script to Gerber on a Sunday. He came back the next day with detailed notes and was able to reference moments on specific pages. He told her the script was solid and wanted to lay out next steps. From there, Gerber helped Samantha develop a marketing and packaging plan to pitch her film to studios.

“I read somewhere that film is the saddest art form as it relies on money. No man is an island and no film gets made without a team willing to support it,” Ferrand says. She’s responded to that reality by using her time with Gerber to hone her professionalism.

Watching how the seasoned producer works has taught Samantha that after school, you can’t just hang out and talk about ideas—you have to put in the work to make it happen. As Gerber puts it, “You have to be willing to wash dogs or sort through trash—whatever it takes to finish your movie and make it great.”

Ferrand is taking that advice and making the moves that will jump-start her career. It’s an unfortunate truth that people will steal your ideas in Hollywood. That’s why she decided to copyright her feature script. She’s also starting a production company with her friend and collaborator, Beliz Eryilmaz, and they went through the process of establishing it as an LLC.

“The mentorship program is about more than just project preparation. It’s an opportunity to plan out your future post-graduation.”

Ready for the Industry

When Samantha meets with Gerber now, she “feels much more relaxed, and sees him as a normal person.” In addition to helping her learn to develop a rapport around successful figures, Gerber has taught Samantha what studios are looking for when they take on new movies.

That will help her in the not-too-distant future, when she pitches her film to industry executives. “I won’t be intimidated when that actually happens, no matter who the people are,” she says. “I feel like I could walk onto a lot tomorrow and do a solid job.”