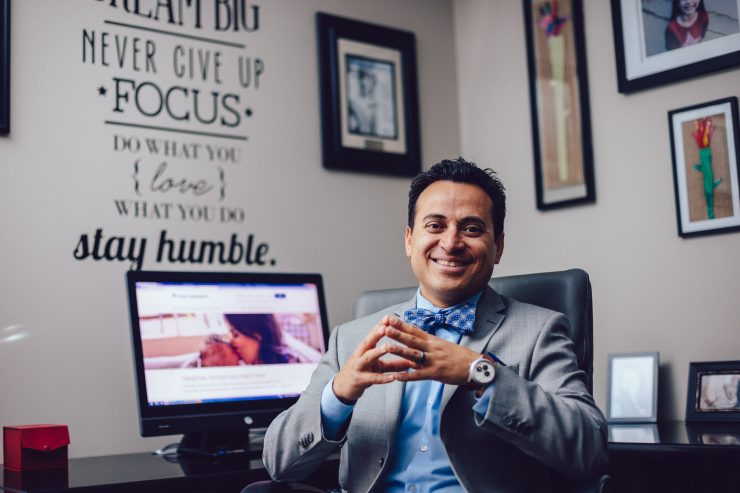 Forging the First-Gen Path in Your Family? These Folks Have Advice

Being “the first” to achieve something is usually an accolade proudly declared. But students on track to become the first in their family to graduate from college often prefer to keep that fact to themselves, says Quaylan Allen, director of Chapman University’s First-Generation Programs.

His advice? Embrace that identity.

“Be highly proud. The fact that you have made it to college and are the first one in your family to do so means you have shown tremendous resilience and skill,” says Allen, Ph.D., who is also an associate professor in Attallah College of Educational Studies.

This week, Chapman honored first-generation students, who make up 20 percent of the University’s enrollment, as part of National First-Generation College Celebration day. Chapman will host a 1G Celebration on Friday, Nov. 8, in Argyros Forum to cap off the week’s special events.

Some of the best support, though, is to tap into the experience and advice of others who’ve gone before, Allen says. In that spirit, we offer these insights from a few of Chapman’s very own first-generation success stories.

“I had always performed really well in school. My grandparents and my mom would always say, ‘You’re going to be a lawyer, or you’re going to be a doctor.’ I knew growing up that I was going to college. Then I attended Summer Search Bay Area and they provided me with support to help get me into college. Their mentorship and guidance through that process was super helpful.”

“I came in as a psychology major and I didn’t know you could change your major. I thought, ‘Oh, you’re committed to it you’ve got to do it.’ Luckily, I overheard other people talking about changing their major.”

“You don’t have to walk on eggshells. I didn’t realize I could speak up about what I was feeling. Don’t say no to yourself, even if you have to be flexible with the route that you have to take. You deserve to be there. You had to work hard to get there. Find support on campus, whether it’s a professor or someone in financial advising or an admissions counselor.”

“From a very young age, both of my parents always stressed the importance of education so that we could work more with our minds than in the hard labor that they experienced. My parents didn’t understand the complexity of getting into college. … I didn’t know you could study for the SAT. I just showed up to take the test. Fortunately, I was good at math!”

“Moving into the dorms was a big culture shock. None of my family had ever experienced someone moving from home and into a college dorm. That was a big change. Granted , we weren’t very far from each other, but moving away was a big deal. So having to deal with that was not easy.”

“Take advantage of the opportunities in front of you and don’t wait for them to fall into your lap. Understand that you’re the architect to establish the blueprint for your future.”

Editor’s Note: Martinez will be on campus Tuesday, Nov. 12, starting at 4 p.m. to join Janeen Hill, Ph.D., dean of Crean College of Health and Behavioral Sciences  in a Fireside Chat at Kennedy Hall, Room 237A

“The first person to enter college in my family was actually my eldest brother, Eric. After him, my older brother Paul also attended college. They have since entered the computer science field.

My path was a little bit different than theirs. Growing up, it was expected of us to attain a higher degree because it was required to achieve a good-paying job. My parents had immigrated to the U.S. due to the Khmer Rouge, the communist takeover of Cambodia. When they entered the United States of America, they started with very little and so even the children had to work, including my mother. However, my parents wanted something different from us. They wanted us to be educated and well off. So although they didn’t have that opportunity for themselves, they wanted us to have that chance. With this knowledge, there wasn’t a doubt in my mind growing up that I would move on to higher education. The only problem was that, for the most part, I didn’t know the process. I also wasn’t sure how finances were going to work since I had four siblings.

Later, I would find out that the military could finance my education. With this knowledge, I planned to enlist. As I continued through my enlistment, I had considered staying in. However, I wanted to help people differently. The hardships that I went through in my adolescence had motivated me to become a therapist. To do so, I knew that I would have to leave the service and attend college full time. To this day, my family’s sacrifice and my personal goal of becoming a therapist have kept me pushing through my studies.”

“Once I transferred to California State University, Fullerton, I felt a bit out of place. Most of the students there were younger than me. They were also focused on different objectives. To me, other students were discovering who they were or what role they wanted to have in the future. I, on the other hand, had a goal in mind already and was focused on accomplishing it.”

“Since entering Chapman, I have been attending workshops and clubs. When I was at my undergraduate, however, I wasn’t involved much in school. Being more involved in other academic pursuits has, in turn, given me new perspectives as well as enduring experiences.

If you plan to move on to graduate school as well, make sure you do your research early and get to know your professors. It may feel a little awkward at first, but go to your professors’ office hours, let them know about your academic interests. The better they know you, the better the letter of recommendation will be.”

Dean of Students and Vice President for Student Affairs

“I don’t think there was an aha moment in this regard. It’s funny, I was the youngest of four, and none of my older siblings had gone to college, yet there was always the assumption that I would. My parents were highly proud and supportive of my academic achievement in high school, so I think they just encouraged me to keep going down that education path.”

“During first semester away at a four-year college (my first year was at a local community college), I was enrolled in 16 credits but really struggling with my calculus and physics courses. I was talking with my residential advisor about my concern that I could not salvage both courses, but couldn’t stand the thought of getting a D or even an F in one of them. He said, ‘Why don’t you drop one of them and focus on the other one?’ I had no idea that once you enrolled in a course you could simply un-enroll! I thought once you were in a class you had to finish it. I think about this experience a lot when working with first-generation students – how we should make no assumptions about what is or isn’t obvious to them.”

“I like to remind first-generation students that a lack of familiarity with college and how it works is not the same thing as being unprepared for college. A strong work ethic and the initiative to seek answers when you have questions will quickly erase any disadvantage you may have coming in.”