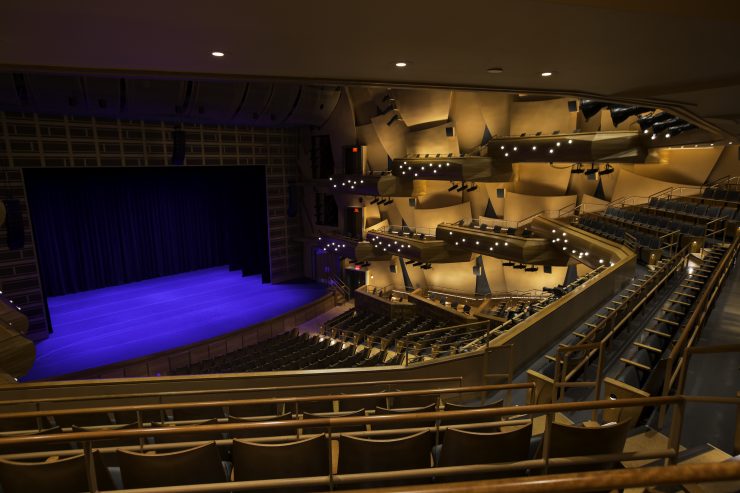 Parity’s The Thing College of Performing Arts pays tribute to the female narrative, planning a season full of shows written and directed by women.

Hollywood is working to bring gender parity to movies. The League of Professional Theatre Women launched an effort pushing for 50/50 gender parity in American theatres by 2020, just in time for the 100th anniversary of the 19th Amendment guaranteeing women’s right to vote. And if you’re a “Toy Story 4” fan, you’ll know that even that beribboned Bo Peep is taking charge these days.

So what could be more topical than an entire theatrical season planned around plays and musicals written or directed by women?

That’s the thinking behind the upcoming 2019-20 theatrical season lined up by Chapman University’s College of Performing Arts. When the planning committee met to discuss the theme and choices for the academic year, an overarching idea came into focus – women’s stories. The result is #HERSTORIES, an eclectic, entertaining and provocative selection of plays, including a Broadway-style musical – think Dolly Parton with a lasso, if you catch our drift – all written or directed by women.

“I’m excited about each and every one of these shows,” says John Benitz, chair of the Department of Theatre, which is staging the productions. From “9 to 5: The Musical” to Shakespeare’s “Measure for Measure,” each production offers challenging roles for students. Collectively, the plays also give voice to women’s stories and opportunity to women directors and stage designers.

“Everybody in the industry is saying it’s time for equal representation. We took that challenge and think this is something that actually we can do in our own small way,” Benitz says.

Just as important is that all the productions deliver good stories exploring the human condition, but just through a slightly different lens, says Jocelyn Buckner, Ph.D., assistant professor of theatre.  Even the season opener, Aristophanes’ classic play “Lysistrata,” which has the women of Greece launching a sex strike as a protest of war, will be staged with a script adapted by a female playwright.

“One of the misperceptions about stories written or directed by women is ‘Oh, it’s a woman’s story. It’s not applicable to me.’ Yes, it may affect women in personal ways, but there are things in these stories we all can learn from and identify with,” Buckner says. “That’s something else that I think this season is attempting to do – rewrite the narrative that women’s stories are not universal.”

As is tradition, the department will hire mostly outside directors and stage designers for the shows, a practice that exposes students to a variety of professionals and working styles, Benitz says. The exception is the Shakespeare plays, which benefit from the direction of Chapman Professor Thomas F. Bradac, past president of the Shakespeare Theatre Assn. of America and the former artistic director for Shakespeare Orange County.

However, a female co-director for the fall production of Shakespeare’s “Measure for Measure” will join Bradac. Together they are planning a new approach for the tragicomedy set in a Vienna rife with moral corruption.

“I don’t want to give anything away, but they are going to make it very current,” Benitz says.

The spring semester half of the season will open with a fully staged production of “9 to 5: The Musical” on the main stage of Musco Center for the Arts. The musical written by Patricia Resnick follows the plot of the 1980 film comedy starring Dolly Parton, Jane Fonda and Lily Tomlin as harassed office workers who craft vengeance against their lecherous boss.

Other spring offerings include “The Wolves” by Sarah DeLappe, a finalist for the 2017 Pulitzer Prize for Drama, which explores the adolescent girl power at play on a high school girls’ soccer team.

“It’s about how it was used by male doctors as a control over women,” Benitz says. “And how women pushed back and found their own power.”

And isn’t that what #HERSTORIES is all about?

The Department of Dance and the Hall-Musco Conservatory of Music also will highlight works composed and choreographed by women throughout the 2019-20 season. What’s more, the theme for the scholarship gala Chapman Celebrates will be “Celebrating the Female Voice,” as proud Chapman parent Vanessa Williams receives the Lifetime Achievement in the Arts Award (see story on page 34). For tickets and details for these events as well as the theatre season, visit www.Chapman.edu/voices.