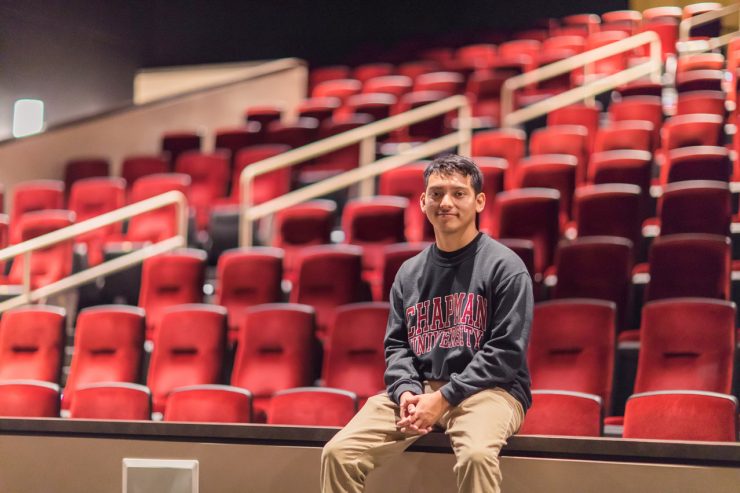 Camera-Ready and College-Bound Chapman partners with Santa Ana schools to prepare young filmmakers for success on the set and in the classroom.

The lights dim. The room grows quiet. The director yells, “Quiet on the set,” as actors take their positions and the camera operator sets up for a medium shot.

The scene could be straight from a Hollywood sound stage. Except that in this case, the eyes looking through the lens belong to a 9-year-old student.

This production is part of the curriculum offered at Heninger Elementary School and nearby Santa Ana High through the Latino Film Institute’s Youth Cinema Project. Students as young as fourth-graders are eligible to participate.

“Teaching cinema allows the students to be able to (learn) communication, collaboration, critical thinking and creativity,” Olmos told The Orange County Register when he spoke at the Santa Ana High graduation in May. “Self-esteem, self-respect and self-worth has been gained by every person in it.”

“Chapman is a great place to learn. All the students (in the project) would be a great fit. I’m looking forward to next year, when someone else from the program will also come.”

Students learn from industry professionals in a real-world setting. They even get to screen their creations in Chapman’s Folino Theater at the end of the school year.

Joe Slowensky, vice provost for institutional effectiveness and faculty affairs at Chapman, and a group of Dodge College administrators were immediately impressed when they visited the Youth Cinema fourth-grade class.

“The students were creating storyboards and shot lists, running the set collaboratively and editing films on their computers. They were incredibly organized,” says Slowensky, also a professor of film and media arts at Chapman. “We were blown away. If these kids are starting to make movies in the fourth grade, imagine their potential if they continued that education through high school — not just in film, but in any discipline.”

Slowensky wanted to start the students on a journey toward continuing their education at Chapman, launching a special partnership between the University and the Santa Ana Unified School District. Now, in addition to industry-standard tools at Dodge’s working production studio, Chapman is providing up to 10 scholarships per year to Santa Ana High students in the Youth Cinema Project. The first scholarship recipient is Miguel Mendoza, who will start at Chapman this fall.

“Chapman is a great place to learn,” says Mendoza. “All the students (in the project) would be a great fit. I’m looking forward to next year, when someone else from the program will also come.”

Sofia Cuevas, lead curriculum designer in the program and a teacher at Santa Ana High, reflects on her time instructing Mendoza and the other students. “Miguel would pull up a chair every day for three months to talk shop about his films,” she says.

“Over the summer, I still get emails from students asking me for writing workshops on their scripts and ideas. It’s a good problem to have,” Cuevas adds.

“We were blown away. If these kids are starting to make movies in the fourth grade, imagine their potential if they continued that education through high school — not just in film, but in any discipline.”

The benefits of the program extend beyond creativity and filmmaking. Youth Cinema students consistently earn higher overall test scores than the district average.

In addition, the students “are no longer fearful of the writing and reading required for college,” Cuevas says. “They’ve started defining themselves in such a positive way. They have a better sense of self – and they have even begun to find ways to open doors and advocate for themselves.”

The Youth Cinema partnership between Chapman and Santa Ana Unified will continue to evolve and grow.

“We’re still figuring it all out. It’s new to so many people, especially in our school district,” Cuevas says. “As educators, if we aren’t willing to stumble, we won’t be able to find treasure.”

Even now, the quality of the students’ work shines through as their films are shown on the big screen.

“When you give students a space to create, they’re going to surprise a lot of people,” Cuevas says.