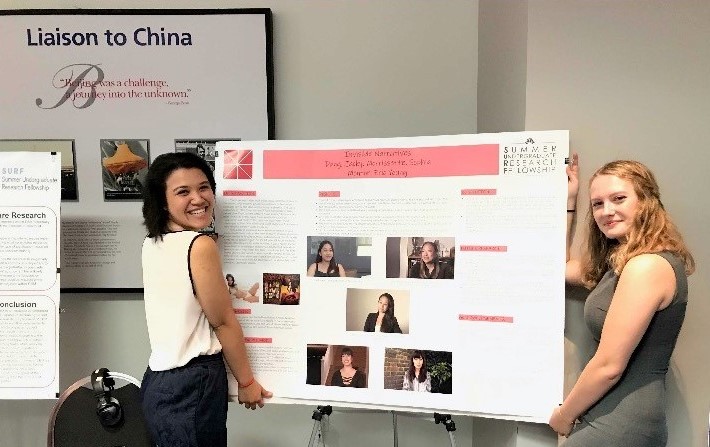 Looking for Herself in the Media Mirror A Chapman student and her research partner seek insights amid the Asian-American stereotypes in film and on TV.

Jacky Dang ’20 braces for the worst when she gets into an Uber or Lyft. Oftentimes drivers and other strangers she meets don’t believe her when she says she is from Huntington Beach. They ask where she is really from – as if she couldn’t be a native-born American.

Stereotyping against Asian Americans is something Dang faces every day.

“I sometimes feel isolated because I don’t know where I come from or about Asian- American history. I feel like if I saw more people like me in the media and could better understand my past, maybe I could understand who I am as a person,” said Dang, a screenwriting and peace studies double major.

Inspired by a Professor

After taking a women’s studies course with sociology instructor C.K. Magliola, Dang was inspired to conduct her own research into stereotyping.

“Professor Magliola is one of the strongest humans I’ve ever seen, and she’s Asian American,” the student said. “So for me she became this role model, and I thought, ‘Wow, I don’t really see a lot of representation of strong Asians like her in media.’ And I didn’t understand why.”

So Dang developed a project that was accepted by the Chapman Summer Undergraduate Research Fellowship (SURF) program, during which students receive a stipend and faculty mentorship to conduct research. Because of her training as a filmmaker, Dang decided to create a short documentary to present the findings of her project. She partnered with Sophia Morrissette ’21, a psychology and peace studies major, and sought the mentorship of Eric Young, assistant professor in Dodge College of Film and Media Arts.

Dang and Morrissette began their project by watching as many representations of Asian women in media as they could find. They analyzed from a specific perspective, searching for examples of whitewashing – casting white actors in Asian roles – and stereotyping.

After analyzing about 50 films and other media representations, Dang and Morrissette concluded that when Asian female characters make it to the screen, they overwhelmingly fall into one of three categories:

Dang and Morrissette met with Young multiple times each week to discuss their findings. He often recommended movies or literature and introduced them to potential interview subjects. They talked with several female Asian-American actors and others in entertainment.

The students found that each interview subject had a similar grade-school experience.

“Every person had a ‘lunchbox story’ – fearing that the traditional foods their mom had packed might provoke reactions in other kids. It was the first time I considered how being white gives a sense of sameness that makes other people automatically feel minimized,” Morrissette said.

As part of their research, Dang and Morrissette read media diversity reports and followed the entertainment industry trade publications. From this secondary research, they found that only 1 percent of leading film roles are portrayed by Asian actors. For broadcast television, the figure is 3 to 4 percent.

The goal for the students’ documentary is to raise awareness so there are more opportunities for Asian-American female actors and more richly developed characters for them to play, Young said.

“I want to start a conversation,” Dang said. “I can’t be the only person who feels isolated because I don’t see myself represented or know a lot about my culture’s past.”