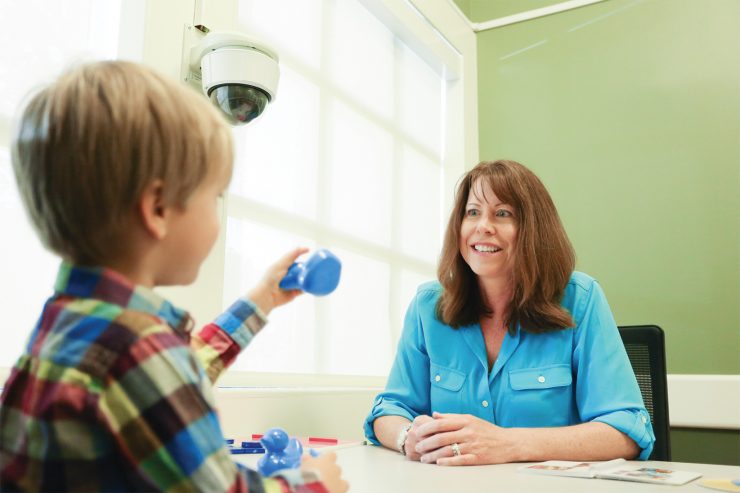 The Mind of a Mom In Laura Glynn’s lab, the effects of pregnancy and parenthood get special scrutiny, driving hopes for advances in preventive care.

Scientist Laura Glynn has long been interested in the perinatal period and its implications for both mothers and children. Her work could someday help physicians flag conditions that contribute to preterm birth and postpartum depression in women and cognitive delays and mental health problems in children.

Glynn’s research contributes to a growing body of literature showing that what happens during pregnancy is increasingly understood to have lifelong impact on the baby’s brain structure, as well as the mother’s.

But the Chapman University professor of psychology can’t help but smile when she gets the “mommy brain” question. The routine realities of pregnancy and maternal brain development capture her attention, too. So, naturally, people ask about so-called mommy brain, that bit of mental fuzziness surrounding childbirth that leads to lost car keys or forgotten appointments.

“It’s hard to acknowledge that not every aspect of motherhood is positive,” Glynn says.

Don’t fret, though. “Mommy brain” typically is mild and does not impair significant decision-making. And Glynn, Ph.D., understands the interest. She, too, is curious to understand how this phase of female life noodles with a woman’s brain, cognition and behavior.

To understand things like postpartum depression, or how a woman becomes a sensitive, caring mother, we really need to understand this reproduction transition that’s largely been ignored by scientists.”
– Laura Glynn

“This is part of what spurred my work – women saying, ‘I’m different after pregnancy,’” Glynn says. “For me as a researcher, that is near and dear to my heart. It is an underappreciated fact that pregnancy represents a period of neurological growth for a mom and that this is a sensitive period of development in a woman’s lifespan. To understand things like postpartum depression, or how a woman becomes a sensitive, caring mother, we really need to understand this reproduction transition that’s largely been ignored by scientists.”

Glynn is helping to close up that knowledge gap. She leads Chapman’s Early Human and Lifespan Development Research Program, which makes its home in a historic schoolhouse refurbished by Chapman to house Glynn’s lab.

Along with making home visits to mothers and children, research staff and undergraduate research assistants interview, videotape and observe the same participants for years, gathering information on physical and emotional development as well as family life and economic circumstances. The oldest in this cohort of children are turning 18, so researchers have shifted their information-gathering to include behaviors and pathologies of young adulthood. Such information may help Glynn discover links between early-childhood exposures and adult health conditions, ranging from obesity to depression. 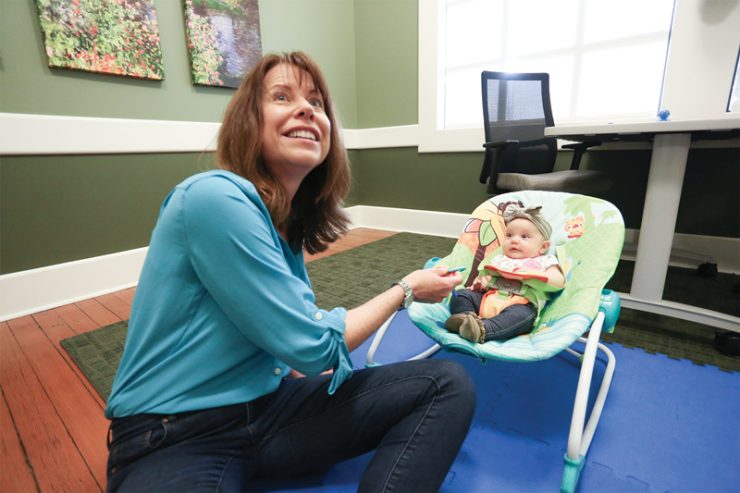 In collaboration with grant partners at University of California campuses in Irvine and Los Angeles, Glynn has reported on a variety of study findings through the years. In one study, she and other researchers identified patterns affecting African-American women who suffered multiple racist experiences in childhood. Rates of premature birth and maternal high blood pressure increased, as did those of low-birth-weight infants.

Glynn hopes more research like this can help clinicians create better intervention strategies and treatment plans that would improve health outcomes for mothers and their children.

“It’s hard to lift kids out of poverty. But maybe you can buffer the impacts,” she says.

More work is needed to understand what’s happening with pCRH, which may initiate a mother’s alertness to her infant’s needs, she says.

“Mom has her baby, and she’s anxious about it. That’s normal. I think what may be going on is that for some women that change in anxiety is very extreme. It may move out of that functional range and into a pathological range,” she says.

Postpartum depression has long been categorized as a major depressive disorder. But these findings that connect it to the placental hormone suggest it may be time for clinicians and scientists to rethink that diagnostic categorization and devise treatments unique to postpartum conditions, says Glynn, who reported the findings in the journal “Depression and Anxiety.”

Glynn’s research also extends to the typical influences of pregnancy on maternal brain development. Pregnancy exposes women to more hormones than at any other time in their lives. On a graph that Glynn shares when she talks about lifelong estrogen exposures, the exposures during adolescence and menstrual cycles barely register on the scale, compared with those of pregnancy.

“Underappreciated is the sheer magnitude of these changes,” she says.

This type of exposure certainly fosters a unique brand of neuroplasticity, the process by which the brain changes and adapts throughout life, she says. In rodent studies, evidence suggests that childbirth and mothering make for better foraging skills and offer protection against cognitive aging.

Back in the human world, one of Glynn’s studies found that mothers were better at accurately recognizing anger, fear and disgust.

It’s fun to relate such findings to those clichés that liken new moms to mother bears, or to recall mothers who really did seem to have eyes in the backs of their heads. But for Glynn the real joy is looking for the clues that will lead to a new understanding of how biology, psychology and environment influence the maternal brain.

Science still has a ways to go on that front.

“There is still so much we don’t know,” she says.

But on one count, she is confident.