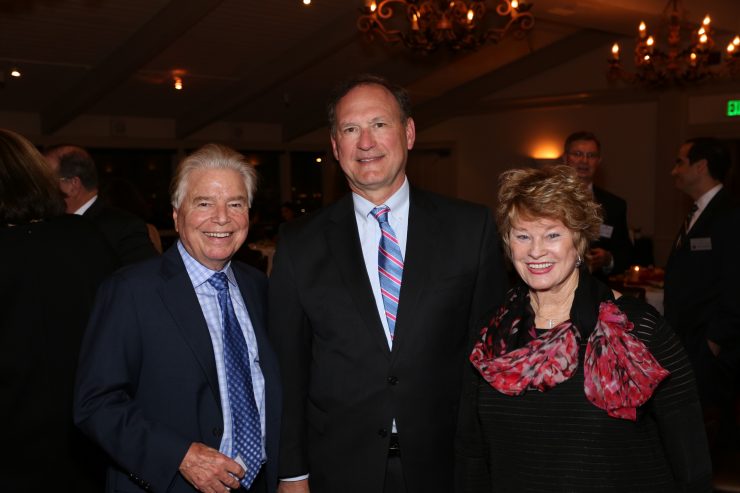 U.S. Supreme Court Associate Justice Samuel A. Alito, Jr. shared stories from his early career, insights into the lesser-known traditions of the high court– yes, the justices sing “Happy Birthday” to each other–and his thoughts on the future of the law during a February visit to Chapman University’s Dale E. Fowler School of Law.

Alito was the featured speaker at a luncheon for the Chapman Law Review’s Annual Symposium “The Future of the Legal Profession.” In addition, he participated in an informal Q&A session with John Eastman, Ph.D., the Henry Salvatori Professor of Law and Community Service and a former clerk for Alito’s colleague on the court, Associate Justice Clarence Thomas.

Alito, nominated to the high court by President George W. Bush, is the fourth associate justice to visit Chapman. Thomas presided at the grand opening of Kennedy Hall in 1999 and returned to give an address in 2007; Associate Justice Antonin Scalia visited in 2007 to deliver the Madison Lecture and to participate with law students in a re-enactment of the famous 1905 Lochner vs. New York trial; and Associate Justice William O. Douglas spoke in 1964 as part of the Artist Lecture Series.

Display image at top: Wylie Aitken, left, chairman of the Board of Trustees for Chapman University, and his wife, Bette, join U.S. Supreme Court Associate Justice Samuel A. Alito, Jr., at a dinner in Alito’s honor. – Photo by Challenge Roddie