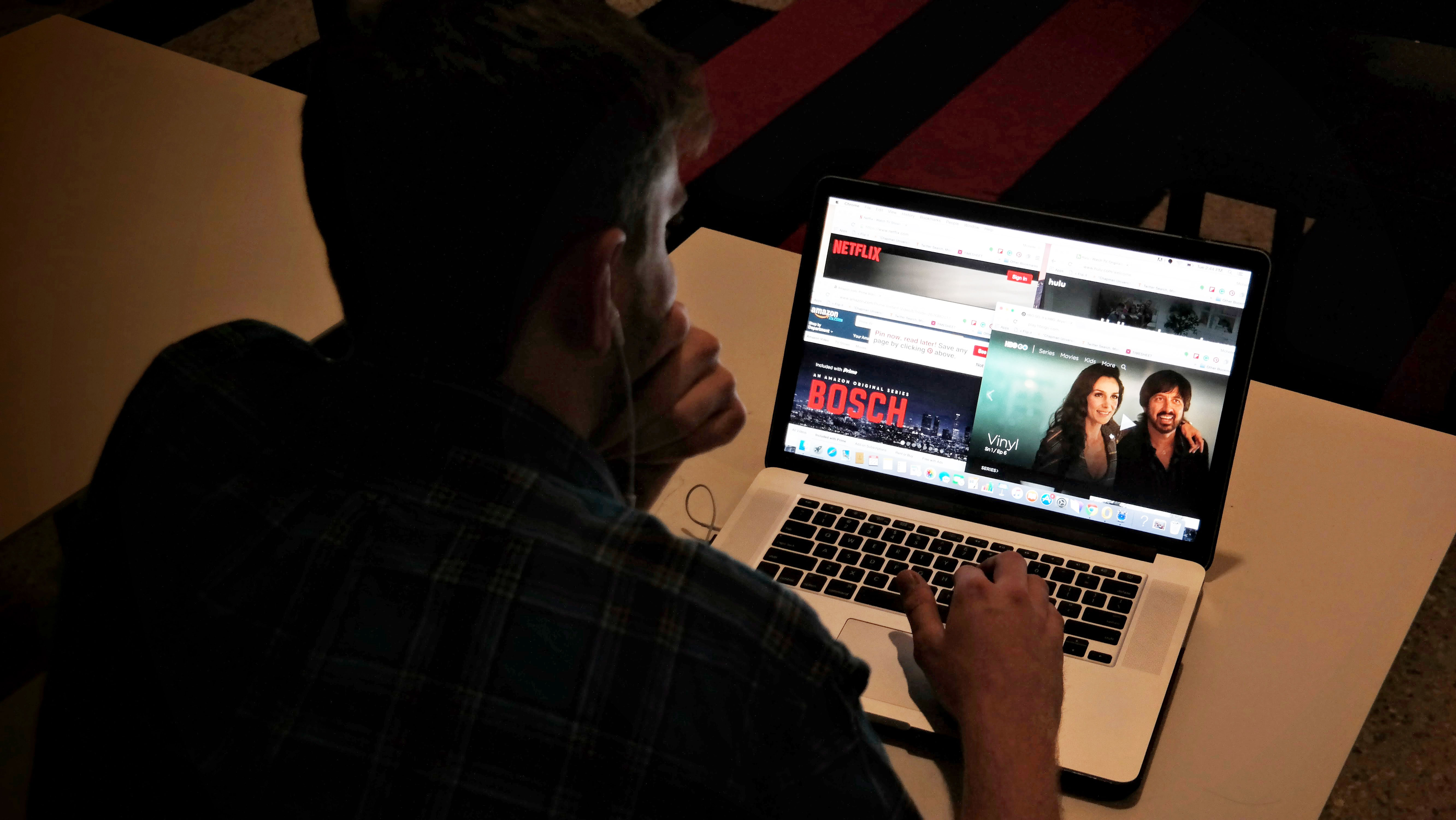 In 1841, the ships that brought the last installment of Charles Dickens’ wildly popular serialized novel
The Old Curiosity Shop were met on the docks by clamoring, obsessed fans, eager to know the ending of this sentimental tale of family woe.

“Some shouted, ‘Is Little Nell dead?’ to the sailors as the ship arrived,” says
Richard Ruppel, Ph.D, professor in the Department of English and chair of Peace Studies.

Sound like anyone you know, ye old fans of television binge-watching? Now devotees of the episodic story style clutch lap tops in bed or plop down in front of family room big screens, firing up just one more chapter of House of Cards, Better Call Saul and any number of other binge-worthy fare, hungry for the latest installment. They dive into online gab fests about a favorite program, and in the next minute turn from spoiler-alert conversations about another. And the snacking? Definitely trouble.

Yes, binge-watching is making us a little goofy. But we’re not alone.

“It is a tribal behavior,” says Stephanie M. Takaragawa, Ph.D., a cultural anthropologist who teaches in Chapman University’s Department of Sociology and researches visual communication.

From television writing veterans who consider it as a boon, to anthropologists like Takaragawa who see a new behavior to put under the microscope, Chapman scholars are interested in binge-watching on many counts. But the common thread running throughout their thinking is that the phenomenon is changing how people consume television, and sometimes it even shapes the storytelling itself.

“Richer opportunities have opened up for longer-form storytelling and made it less formulaic,” says
Ross Brown, associate professor at Dodge College of Film and Media Arts who teaches television writing, as well as a course titled The New Era of Television.  This modern habit of settling in for a bender ofUnbreakable Kimmy Schmidt, documentaries like How to Make a Murderer and even new-old favorites like Friends is not a passing fancy. Consider:

How did we go from shunning television as the “vast wasteland” to embracing it as a source of quality entertainment? Thank the movies and technology, Brown says. (And yes, most people still call it television, whether it’s streamed or broadcast, he says.)

“Television is the place to go for story these days, rather than feature films, because feature films are so economically beholden to deliver spectacle rather than human drama,” he says. “That’s just how this has evolved, coupled with the explosion of online platforms – Netflix, Amazon, Crackle. It’s endless now.”

Today’s writers are freed from the formulas of weaving around commercial breaks and can develop complicated characters and stories, he says. Plots flow across multiple seasons because there is less concern about writing episodes that will have to stand alone in rerun syndication. And subscription and paid-streaming services don’t shy from adult themes.

All of which Brown sees contributing to the urge to binge.

“Back in the day even loyal viewers of a show only saw one out of three episodes. Now you can’t do that. You have to see them all. There’s an itch for the viewer,” he says.

Anthropologists like Takaragawa are interested more in the how rather than the why of binging. She says academic studies are still needed, but she sees an interesting contradiction between people who join in the group behavior of robust online conversations about favorite shows and those who sit and binge alone.

“There are a lot of other things that have happened with this technology that we have,” Takaragawa says. “There’s this ongoing discussion online of the stories, the 24-hour access.”

Like their colleagues in drama and comedy, documentary filmmakers are also encouraged by the boom in content providers, from Hulu to HBO Go and streaming delivery systems. Documentarian
Sally Rubin, assistant professor who teaches documentary filmmaking at Dodge College, says new audiences have sparked a burst in creative non-fiction stories that go well beyond the science, nature and history documentaries of the past.

“It’s just so much easier to access documentaries. Documentary topics are all over the map. … You see more portrait stories — stories that are about people” Rubin says.

Step, or march, away from the snacks when you binge

You work out, and so you think this story about how binge-watching is bad for your health doesn’t apply to you. Think again.

Studies show that the metabolism of even a physically fit person slows during extended bouts of sedentary activity, like marathon television watching, according to Eric Sternlicht, Ph.D., associate professor in the Department of Health Science and Kinesiology at Crean College of Health and Behavioral Sciences.

“You can’t make up for it,” Sternlicht says. “The human body was meant to move.”

Sternlicht sees nothing but trouble ahead for Americans who add binge-watching to an already mostly sedentary lifestyle.

But you can battle back. Studies of sedentary people find that those who are “breakers,” meaning they interrupt inactivity every 15 minutes with something as simple as walking across the room, had significantly reduced waistlines. And a beefy waist circumference is a key marker for metabolic syndrome, a group of risk factors that raises the risk for heart disease and other problems, Sternlicht says.

He advises breaking up marathon television at least every 15 minutes with stand-up routines of simple movement – even just marching in place for several minutes. Or binge while riding a stationary bike.

“It will allow you to have a longer life,” he says.

And maybe more time to keep on binge-watching.

She also sees troubling developments. She was disturbed when Americans’ fascination with the true crime series How to Make a Murderer
and the investigative podcast Serial
evolved into a kind of sport, rife with gossipy and sometimes vitriolic social media banter that lost sight of the real people still suffering with these recent tragedies.

“People were watching it like it was an episodic television show,” she says. “As viewers we need to think of how we are responding to those shows.”

But insensitivity and bad taste aside, it’s worth remembering those clamoring fans along the New York docks more than a century ago. It’s human nature to be drawn into a story, to want to know how it all ends.

“If you’ve ever read a book to a child at bedtime and you say, ‘That’s it for tonight.’ It’s a fight. And it’s not just because they want to stay up later. They want to know what happens next,” Brown says.

History doesn’t tell us if the sailors divulged what happened next for Little Nell. (Read the book, if you don’t know.) But one hopes not. Because some things, like the hunger for a great tale and disdain for plot spoilers, are true to every age and any media platform.