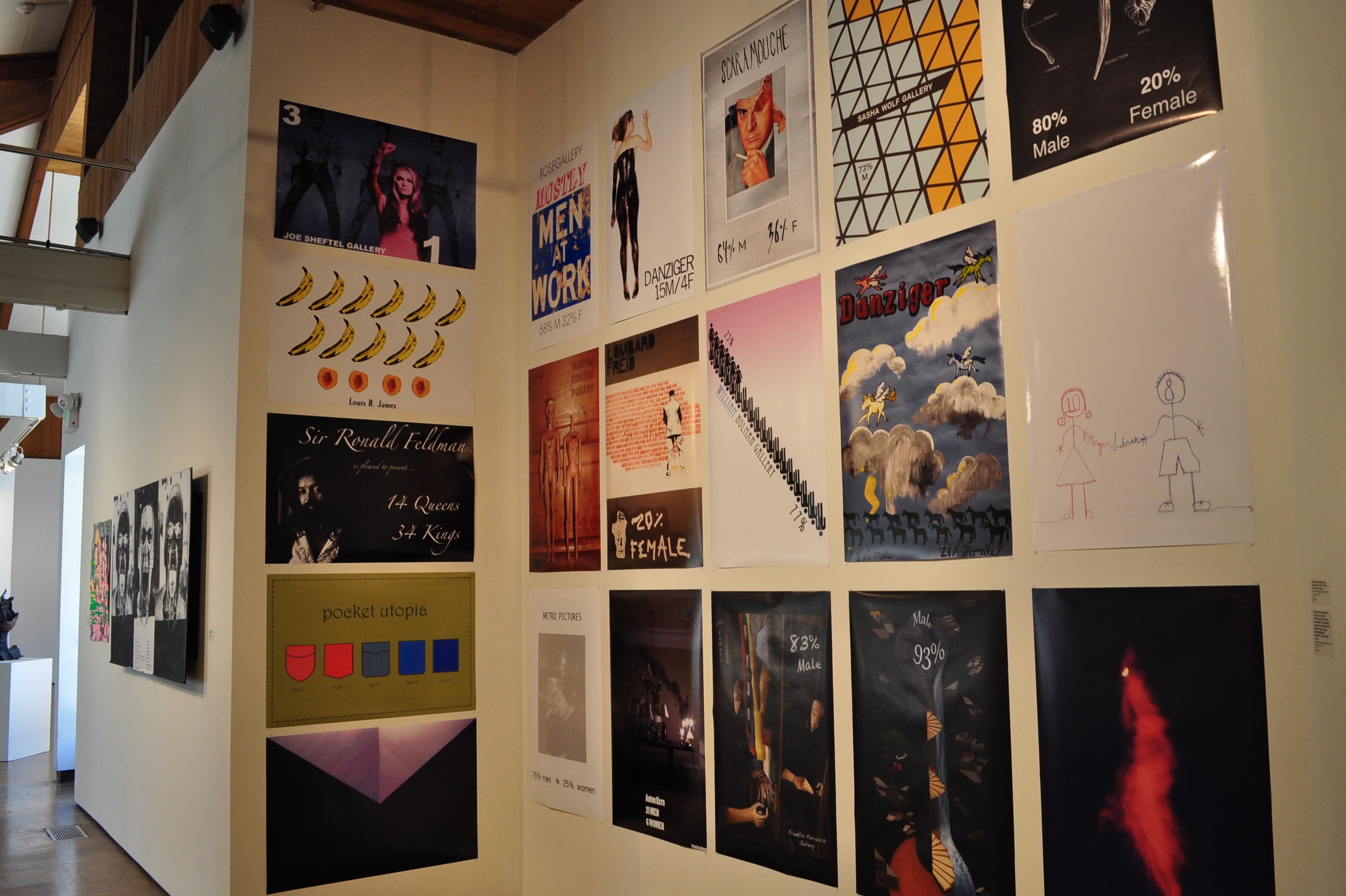 Last fall artist Micol Hebron thought she was procrastinating, dawdling around and avoiding real work as she paged through back issues of
Art Forum
magazine.

On a whim the assistant professor in the
Department of Art
counted how many of the pricey full-page advertisements placed in the magazine by prominent galleries promoted male artists vs. female artists. Next she pored over gallery rosters, comparing the ratio of male to female artists. The counts were remarkably similar – women artists were represented in only about 20 to 30 percent of both the ads and the rosters.

And suddenly a new project was born. Hebron presented her findings in the form of data visualization posters. Soon she invited other artists to join her. They tallied the rosters of the top 100 galleries in Los Angeles and revealed their data in an increasingly eclectic and colorful collection of posters.  Now the project has become
(en)Gendered (in)Equity: The Gallery Tally Poster Project
, a huge collaborative exhibition with more than 300 posters — all poking a finger in the sexist eye of the art gallery community at large.

“None of this was consciously strategized,” Hebron says. “Things just blew up.”

The Gallery Tally collection continues to grow on an open-source Tumblr page, but a gallery exhibition of the work is on display at For Your Art on Wilshire in Los Angeles through April 25. A second exhibit featuring posters created for the project by Chapman University students and alumni is on exhibit at the Irvine Fine Arts Center through Saturday, April 19. The show is expected to exhibit in Miami in the fall and New York at the end of the year.


The project has gained attention worldwide, sparked similar projects from Tokyo to London and drawn significant media coverage in the art industry. All of which has been a heady experience for student contributors. Nimah Gobir ’15 counts it as one of the high points of her Chapman University experience.

“It’s really great to be part of a movement. Gender representation is a huge issue in galleries that I wasn’t fully aware of until this project,” Gobir says. “It has been amazing seeing how everyone interprets the stats they are given. This project really gives me hope that art can be used as a means to tackle  current issues.”

But how does Gallery Tally’s own artist numbers stack up? It is almost inverse to the gallery statistics, with about 70 percent of contributing artists being female. Which makes sense, Hebron says, given that women make up 75 percent of the enrollment in MFA programs.

So if there is no shortage of serious female artists making serious art, why does their work not get serious consideration by galleries?


“It’s a really complicated issue and rooted heavily in discussions of capitalism and patriarchy and the way that capitalism caters to patriarchal biases. There are numerous women who are administrators at museums and galleries that are supporting an all-male roster. So there are also women complicit in this disparity, which is even more frightening. If you look at representation of racial minority, it’s even worse. I think that’s one of the reasons that people haven’t talked overtly about it in the art world because it’s a pretty ugly reality,” she says.


Response by the galleries represented in the poster project has been varied. Some have been defensive, arguing that women artists don’t market themselves as well as men. Hebron’s answer is that women don’t have as many opportunities to market themselves because as the main agents of studio visits with important collectors and museum buyers, galleries still control most of the primary means of marketing.

The loss in all that is not just on contemporary artists who are trying to make a living by showing and selling their art, Hebron says.

“It means we’re all shut out of seeing different experiences,” she says.

Other galleries have been chagrined but tolerant about being called out by the poster project. Hebron smiles when she recounts how some gallery managers greet her when she visits now. “They say, ‘I know, I know! We need to get better.’ I shrug. I’m just putting the numbers out there. I’m not telling anyone what to do. I’m just making the numbers very public.”