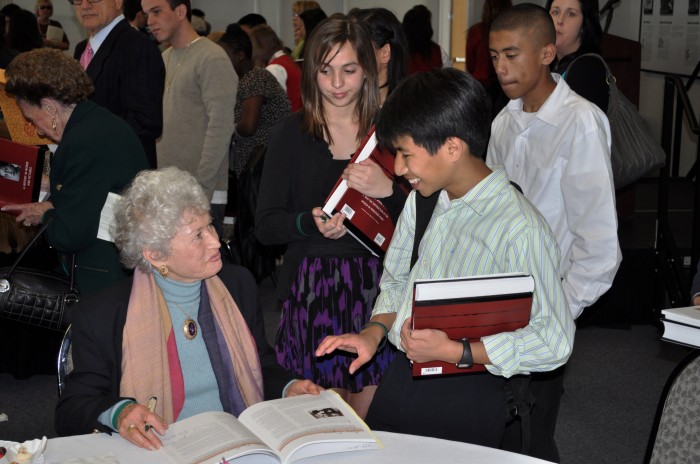 A student meets a Holocaust survivor at a previous Art and Writing Contest reception.
Arts & Film

Students from nearly 150 high schools and middle schools from throughout Southern California, from other states and even from outside the U.S. will visit Chapman University and meet more than 60 local Holocaust survivors at the 14th Annual Holocaust Art and Writing Awards Ceremony at 11 a.m. Friday, March 8, held in the university’s Memorial Hall.

The students – who come mainly from public, private and parochial schools throughout Orange, Los Angeles, Riverside and San Diego counties, although this year there are also students from Wisconsin, Alabama, Pennsylvania and other states, as well as Santiago, Chile  – previously submitted essays, poems and artworks to the contest.  The contest was judged by a panel of Holocaust survivors, local businesspeople, professionals, organization leaders and Chapman faculty and students, and the award winners will be announced at the ceremony.   The national honorary judge for the contest is Nobel laureate Elie Wiesel, Holocaust survivor, author and Presidential Fellow at Chapman University.

Guest speaker at the awards ceremony will be Holocaust survivor Chava Ginz Pressburger, whose brother, Petr Ginz, died in Auschwitz in 1944 at the age of 16.  She will speak about her experiences and her brother – who was an artist and wrote five novels between the ages of 8 and 14 – in a talk entitled “The Courage to Create.”  Music for the awards ceremony will be provided by the Orange County Klezmers.

Following the ceremony, students will have the opportunity to meet with the Holocaust survivors who will be in attendance.  For the eighth consecutive year, Publications International has donated more than 2,000 copies of the hardcover book The Holocaust Chronicle, which will be given to each student.  A high point of the day is when students meet with the survivors and have them sign their books.

“There are not many occasions when this many Holocaust survivors are together in one place and meeting with so many students one on one,” says Marilyn Harran, Ph.D., Stern Chair in Holocaust Education at Chapman University and director of Chapman’s Rodgers Center for Holocaust Education, which is presenting the contest and awards ceremony in partnership with The “1939” Club, a Holocaust survivor organization.  “It’s an important day for the survivors, as they pass along their knowledge and experiences to the next generation, and for the students, who have the chance to meet and be inspired by the living witnesses to the history they have been studying.”

The event is co-sponsored by Chapman’s Rodgers Center for Holocaust Education, The “1939” Club (one of the largest Holocaust survivor organizations in the U.S., based in Los Angeles), the Samueli Foundation and Dana and Yossie Hollander.  The contest is presented in partnership with the Orange County Department of Education and the Catholic Schools – Diocese of Orange, the College of Educational Studies at Chapman University and the USC Shoah Foundation Institute for Visual History and Education, with contributions from Facing History and Ourselves and the Anti-Defamation League.