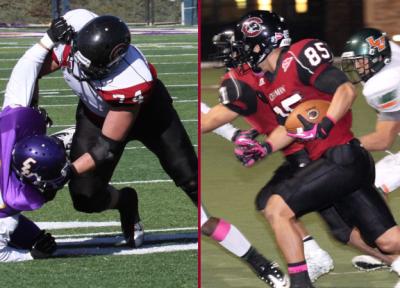 D.J. Brandel (left) and Kali'i Kunitomo will play in the (Photos/Larry Newman)
Sports

Chapman University seniors
D.J. Brandel
and
Kali’i Kunitomo
have been selected to participate in the
All-American Bowl at the Metrodome
in Minneapolis, Minn. on Saturday, Dec. 22. The two will wear Stripes in the Stars and Stripes Game, kicking off a 2 p.m. local time. It is the second of three All-American games hosted by the Metrodome that day.

The All-American Bowl was founded in 1996 to give athletes the opportunity to compete against the best at their level in an all-star game setting. The first All-American Bowl was played in Minnesota and has since been played at various cities across the country including Atlanta, Miami and Las Vegas. The All-American Bowl has several types of games for different levels of competition that include: DII, DIII, JUCO, Minor League Football, Free Agent, and High School. The participants in the All-American Bowls have been nominated for their outstanding performances throughout their season.