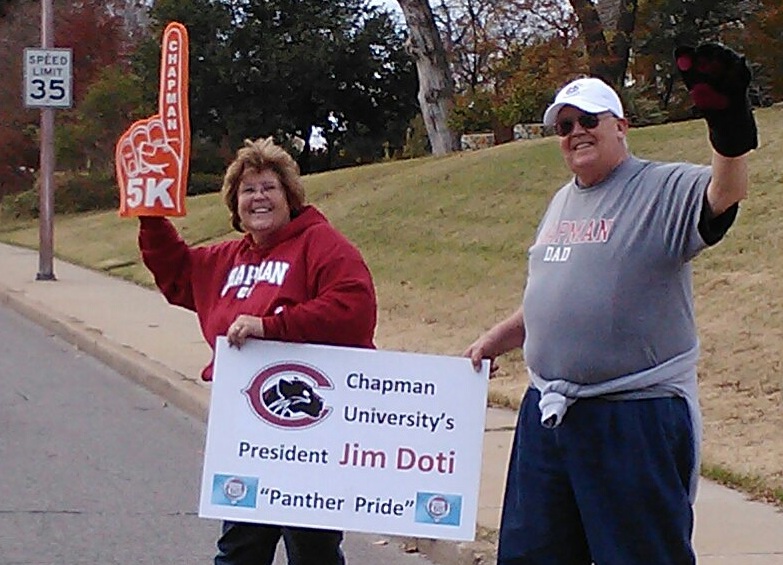 Chapman parents and Oklahoma residents Susan and Mike Bass were on hand to cheer on President Jim Doti during the Williams Route 66 Marathon.
Campus and Students

President Jim Doti zooms to Route 66 finish line, thanks to a blast of Panther Pride

President Jim Doti was at the 16-mile mark of the recent Williams Route 66 Marathon in Tulsa, Okla., when he received a surprise blast of Panther Pride. There along the sidelines, decked out with Chapman University shirts and regalia were Susan and Mike Bass, parents of technical theater major Edd Bass ’15.

“Given their inspiration, I kicked my speed up all the way to mile 26.2,” President Doti said.

The Williams Route 66 Marathon is a Boston-qualifying race that is run on a USATF certified course throughout 26.2 miles of the historic and scenic streets of Tulsa. The race medal is coveted for its distinctive designs, and has been listed by Marathon & Beyond magazine as the top finisher’s medal in North America. This year’s medal celebrates the 1936 Dodge pickup, in homage to the strength and endurance of the 1930s.

President Doti is an avid distance runner, having run in 42 marathons. He will be running his eighth Boston Marathon in April.