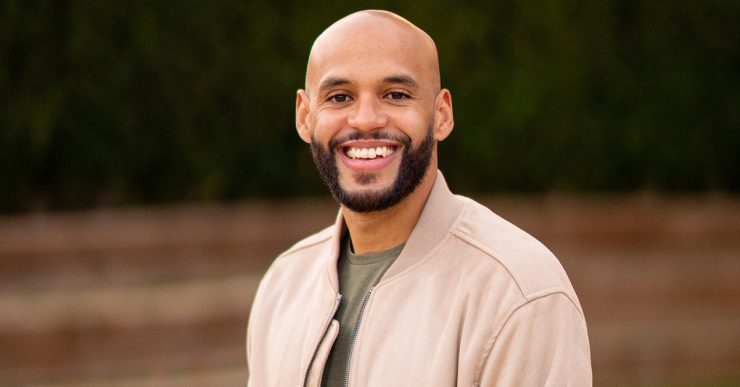 Justin Riley ’11 Named Director of Black Excellence and Achievement at Chapman The newly appointed director has a simple message for Chapman’s Black community: “I Got You.”

Justin Riley ’11, an experienced organizational leader and advocate for diversity, equity and inclusion (DEI), has been named Chapman University’s inaugural director of Black excellence and achievement.

In this newly established position, Riley works under the direction of Vice President of Diversity, Equity and Inclusion Reg Chhen Stewart, Ph.D., to provide leadership, vision and wrap-around support for Black students, staff and faculty.

“Justin’s commitment to Chapman University runs deep, and his desire to see students achieve success is evident in the creativity he brings to his work daily,” says Stewart.

“By reframing his work as director of Black excellence and achievement, we are signaling to both current and prospective students and families that Chapman not only wants your student to feel welcomed on campus, but we want your student to excel and graduate with the fullest of experiences available to them. Through a concerted effort to connect the experiences of Black faculty, staff and students the aim is to create a 360 experience that is intentional and impactful.”

Riley brings a wealth of subject matter expertise in the area of DEI. In 2019, he joined Chapman as associate director of student community support and development where he led the advancement of programs and initiatives aimed at improving the personal, social, academic and cultural wellbeing of Chapman’s diverse and underserved student populations. He also founded Chapman’s Black Staff and Faculty Forum and Black Alumni Association.

In addition to his experience in higher education, the television and broadcast journalism alumnus has over a decade of experience in the entertainment and sports industries and is the founder of Purpose Over Profit, a motivational speaking and personal development service directed at empowering millennials.

Of all his professional roles, Riley says becoming Chapman’s director of Black excellence and achievement is a personal milestone for him.

“As an alum and someone who was very actively involved in advancing the work of DEI on this campus, this role is connected to me,” says Riley.

“The thought of this position during my undergraduate years wouldn’t have even been accepted,” he adds. “To be here 11 years later in an inaugural position for a role that I so desperately wished existed when I was a student is a full circle moment.”

As he takes on the mantle of director, Riley is keeping his focus on the lifeblood of the university – the people. Key among Riley’s strategic priorities: bolstering Black student enrollment, increasing on-campus engagement among the Black student population and connecting the Orange County Black community to the university

“I’m excited to do this work out loud and have everyone on campus know that this work is being done and is no longer in the shadows. This is the opportunity to bring the work of the shadows into the light,” says Riley.

Asked what he wants Chapman’s Black community to know, Riley says, “I see you, I hear you and I support you.” Or, boiled down to three words – “I got you.”